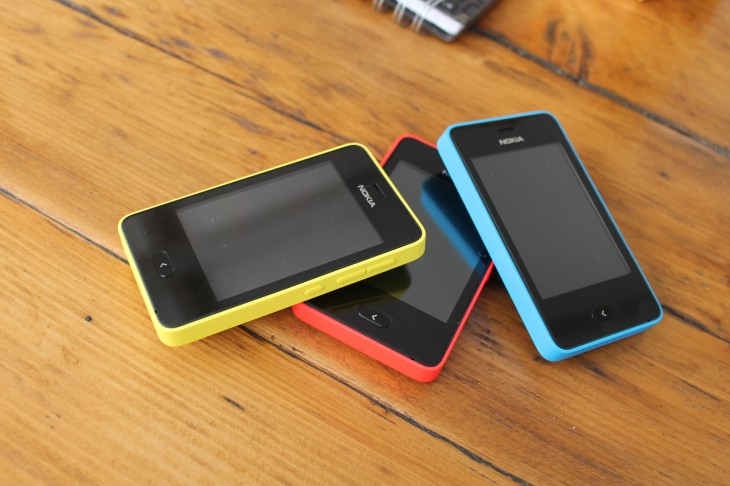 Nokia has been firing on all cylinders of late from a product-launch perspective, and this continues today with the launch of a new range of low-end smartphones, kicking off with the 2G, WiFi-enabled Asha 501.

The 501 is Nokia’s first smartphone built on the new Asha platform, which builds on Nokia’s acquisition of Smarterphone, a company it acquired last year to give its low-end phones a smartphone-like feel. It’s also designed to give developers a more open, standards-based environment to create apps.

The announcement was made in New Delhi, India, this afternoon, but TNW managed to get a brief hands-on with the device prior to today’s official unveiling.

The Nokia 501 represents the 16th handset in the Asha series, a range that consists of both feature- and smartphones.

You may remember earlier this year, it announced a new Asha 310 dual-SIM smartphone for Asia, the Middle East, Africa and Brazil? The 310 was Nokia’s first dual-SIM handset that let users switch between two SIMs and WiFi effortlessly? Well, the 501 continues roughly where that left off, and will offer a dual-SIM and mono-SIM version.

Changing the SIM doesn’t require a reboot – you simply swipe-down from the top, tippity-tap, and you’re on to SIM number 2.

From our brief play around with the Asha 501, it certainly displayed a slick interface with taps and swipes very much the order of the day. It also has many of the common apps you’d expect of any smartphone – including Facebook, Twitter, Foursquare, Line, LinkedIn, WeChat and WhatsApp.

The 501 comes in six colors — red, green, cyan, yellow, white and black — and we’re told to expect 17-hours talk-time and “up to” 48 days on standby, though this will likely fall closer to around 30 days for the dual-SIM model.

It features the familiar Nokia ‘monobody’, which is removable via a button on the back that actually doubles as the speaker.

The backs will are obviously interchangeable too, so even if you plump for black initially, you can buy yourself another casing to suit that new shirt you bought.

Users actually have the choice of two main screens, which Nokia calls ‘Home’ and ‘Fastlane’.

Home is the more traditional, icon-based view for launching apps and accessing the phone settings. The new Fastlane view, we’re told, was inspired by how people actually use their mobile, and features elements such as recently accessed contacts, social networks and apps.

To access the 2 different screens, it’s just a case of swiping left or right.

It also has an interesting feature designed to wake the phone up from sleep mode – simply double-tap on the screen, and you’re good to go. Though admittedly, I had real issues getting this to work a lot of the time, it seems it’s all in the timing between the taps – I’m sure you’ll get used to it.

Other points worth noting is that the Asha comes with Nokia Xpress Browser pre-loaded, which you may be familiar with from the Nokia Series 40, and it’s also available as a download on Nokia Lumia (Windows Phone) devices.

As for its cross-platform mapping tool HERE, this will be available as a download starting in Q3 2013, so at first there will only be a basic mapping service.

Nokia has also secured an interesting agreement with Facebook and Indian operator Bharti Airtel to allow owners of the Asha 501 on its network in India (and Africa — where Bharti has a presence in some countries) to enjoy data-free access to Facebook’s mobile site: m.facebook.com.

Nokia says the agreement will be in place by the end of the second quarter of 2013, though it is unspecific on the length of access, which it says will last “for a limited period of time”.

Though the launch is taking place in India, the handset is very much aimed at international markets, and should start shipping in June to more than 90 countries worldwide. However, this won’t include the US – Nokia is evidently looking to push the Lumia brand hard in the States.

The Finnish mobile giant is already teasing the next in its Lumia line of high-end smartphones, and it recently announced the Asha 210, a featurephone with a QWERTY keyboard and dedicated WhatsApp button. Prior to this it also rolled out two new featurephones and two Lumia Windows Phone devices. So it will be interesting to see what Nokia has up its sleeve for Asha moving forward.

Read next: The Loop: After 20 years on the web, veteran Apple reporter Jim Dalrymple bets on an iPad magazine