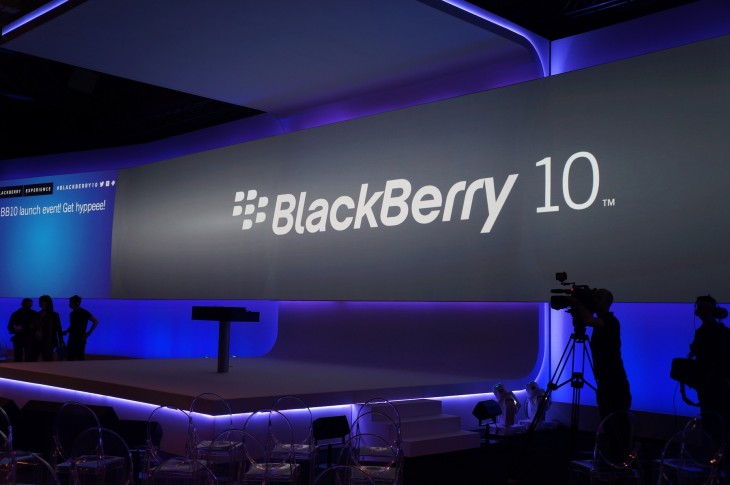 Fresh from its rebrand from RIM to BlackBerry, the Canadian smartphone maker has launched BlackBerry 10 operating system and two new smartphones.

With its new platform and devices — the BlackBerry Z10 and BlackBerry Q10 — the company hopes to usher in a new era where its brand, services and hardware can claw back market share from Apple, Samsung and its other smartphone rivals.

At the launch event, RIM CEO Thorsten Heins described the company’s journey and development of its new operating system. According to Heins, BlackBerry 10 is for people “who are hyper-connected socially, who want to get things done and who want balance in their personal and professional life. It’s for people who want to flow from app to app without having to use a home button all the time.”

“We have created a platform that is able to connect with other machines, connecting to your home, your car or your health care system, wherever you are. This is the promise of the BlackBerry 10 operating system.”

We will get to the operating system later, but what is most important for RIM is its new smartphones. Today, the company launched the BlackBerry Z10 and BlackBerry Q10, a new 4.2-inch all-touch smartphone, with it’s smaller counterpart offering a 3.1-inch display with a full QWERTY keyboard.

BlackBerry 10 is a step away from RIM’s previous operating systems, combining innovative new gesture-based features, combined social and email accounts and support not only for its own services, but Android apps as well.

One such software feature is RIM’s new Flow feature. Doing away with a dedicated home button (at least on the Z10), BlackBerry 10 offers a new way of navigating, allowing you to swipe up from the bottom to unlock the device and display multitasking windows, app lists and also the new BlackBerry Hub.

BlackBerry Hub is where a number of your email, social and Web accounts are kept, displaying notifications from Twitter, Facebook, BBM, LinkedIn, Evernote and various email accounts. BBM gets top billing, but like Windows Phone, the Hub is a central place to see all of your new messages, appointments and notifications, without having to close and reopen apps.

BlackBerry 10’s is nearly all gesture-based and does away with hardware buttons to perform certain functions. While this is an emerging trend in today’s modern smartphone operating systems, it may take a while to get used to.

Like iOS and Android, BlackBerry 10 offers a start screen with a clock (also adding notifications, alarms, calendar events and a quick-access photo icon) but when you unlock the device, there isn’t specific homescreen like on Android or iOS. Instead, you will be launched into a selection of running apps. Swipe left for a list of installed apps and swipe right for the BlackBerry Hub, which gives keeps you updated on everything happening on your device and in your life (should you add it).

Moving from group and person-to-person messaging, RIM unveiled its updated BlackBerry Messenger (BBM) service, announcing the launch of video calling. With millions of BBM users connected already, new device owners will be able to utilise RIM’s own video calling service, which could provide a much-needed alternative to FaceTime and Skype.

RIM also announced the launch of BlackBerry ScreenShare, which allows BlackBerry users to connect to each other’s handsets and mirror their screen on another device. The feature allows information to be shared visually, instead of via text, which may be over particular use to corporate users that may need to demonstrate something to their colleagues or clients.

RIM claims that “most” movies will be available to users on the same day that they’re released on DVD and Blu-Ray. TV shows, meanwhile, will have next day availability, although it’s not clear whether this is in relation to DVD or broadcast releases.

The camera app that comes pre-loaded with BlackBerry 10 appears to be a pretty solid, if not particularly original experience.

The most notable feature is TimeShift, which is essentially a burst shooting mode that can be used to pick the perfect shot from any given moment. So for example, if you’ve taken a photograph but the person is blinking, or you want to take a picture of a fast-moving car, but missed it because it’s shot into a tunnel, you can essentially “rewind” the image until the problem is solved.

If you’ve ever used the used Nikon 1 series, or at least seen some of its marketing materials, you’ll have a pretty good idea of how this works. It certainly helps avoid that problem of constantly trying to guess when you should hit the shutter button in order to compensate for the built-in lag.

Blackberry has confirmed that Skype, Kindle, Whatsapp, SAP, Angry Birds, Facebook, Twitter and Foursquare have committed to BB10. Blackberry has also shared that it has over 70,000 apps available in its store — slim numbers when compared the Apple’s App Store, but it’s important to remember that key partnerships with major app developers will likely matter significantly more in terms of usefulness for users.

Story Maker is RIM’s attempt at creating a fully featured video-editing app similar to iMovie. Users can create short, simple edits coupled with music that is already saved to the device, before adding some pretty interesting effects and filters.

The results look surprisingly slick, and should help BlackBerry 10 owners create polished video content quickly on the move. Of course, once you’re done there’s also the option to share your masterpiece on a variety of social networks too.