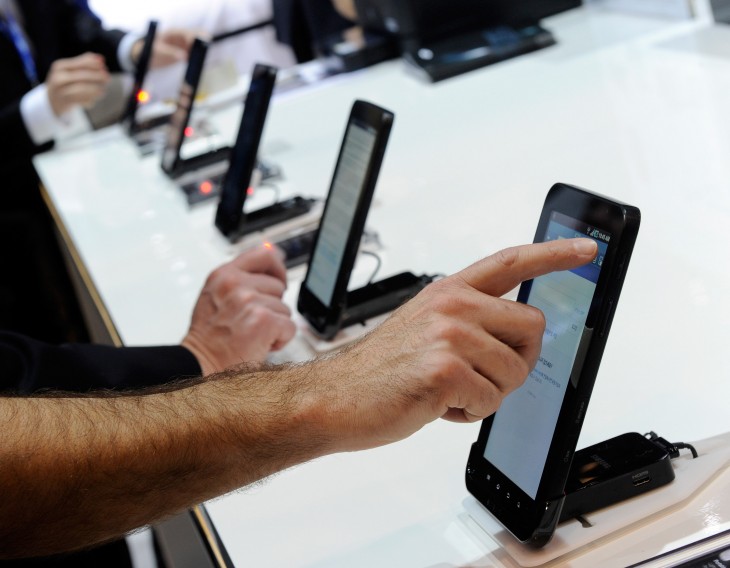 The biggest year for tablets so far was undoubtedly 2012. Amazon and Google stepped up their games, Apple responded accordingly, Samsung flexed its muscles, and even Microsoft showed up to the party. Here’s our take on what happened this year and what it all means.

Before we dive in though, it’s important to acknowledge that there are of course other companies that make and market tablets. The tablet space is still growing very rapidly, but it’s already massive enough for these firms to be able to sell their offerings. Without help from the big guys, however, it is becoming increasingly harder for them to compete. Each of the five has put in a huge amount of resources to ensure they get their cut.

As such, tablet buyers will almost definitely end up supporting the Apple iOS ecosystem, some form of the Android ecosystem (Google’s, Samsung’s, or Amazon’s variations), or Microsoft’s Windows 8 ecosystem. In fact, 2012 showed us that many people will end up with more than just one tablet for themselves, and thus likely multiple in their household.

Without further ado, let’s take a look at the bigger picture of what each company did, and tried to do, this year.

In March, Apple announced the third-generation iPad, only to supersede it in October with the fourth-generation iPad. Yet that announcement was overshadowed by the unveiling of the iPad mini.

This was the second time that Apple had responded to size requirements dictated by the market (the first time being elongating the iPhone 5 after smartphones with larger screens started to flood stores). With the iPad mini, Apple essentially acknowledged that tablets can come in more than one size, unlike its smartphone, as consumers may want something a little smaller and a little lighter.

In doing so, Apple suddenly began offering a less powerful product, with a lower-resolution screen, and at a lower price. While sales numbers aren’t yet available, early indications show the product has been unsurprisingly well received, although there is naturally a question of cannibalization for the larger iPad that has yet to be answered.

Google has been watching its Android partners being pummeled by Apple in tablets and in 2012 decided that enough was enough. In June, the company announced the Nexus 7. It fared fairly well, but that was just version 1.0.

In October, Google refreshed the device with the release of the Nexus 7 3G as well as the Nexus 10. Suddenly the company had both small and large tablet offerings, and although Asus is the manufacturer for the former and Samsung for the latter, Google was sending a message that it was very much interested in competing with its partners and other tablet makers.

Again we don’t have proper sales numbers yet, but the Nexus line seems to be gaining a lot of attention. In order to ensure Android becomes the most popular operating system on tablets, as on smartphones, Google realized it had to get in the hardware game.

Samsung has likely been watching Google’s moves warily. The company had the quietest 2012 of all five companies — in terms of tablets — but that doesn’t mean it didn’t sit there twiddling its thumbs.

In February, Samsung announced the Galaxy Tab 2 and the Samsung Galaxy Note 10.1. The latter should not be confused with the six-inch Galaxy Note II phablet.

Samsung tried to keep things simple in 2012 (releasing three tablets instead of five), but it still kept its older models around. Despite this product confusion, the South Korean company still did very well; the latest quarterly numbers gave it second place by tablet shipments.

Those figures show Amazon in third, and it didn’t get there by accident. In 2012, the company continued to use its retail reach to push its devices to the millions who visited its site.

In September, the company announced the successor to its first tablet effort: the Kindle Fire HD, available in 7-inch and 8.9-inch flavors. With its massive online store, Amazon is uniquely positioned to take on its competitors, all of which have deeper pockets.

This year the company showed it’s going to push harder than ever to make sure it has an offering for everyone. Yet as we pointed out, it has become increasingly more apparent this year that the company needs international content if it’s going to keep up with the rest.

Amazon’s Seattle rival may have been in the tablet space for ages, but it only entered “the second coming of tablets” this year. In traditional Microsoft fashion, this was done in the form of a software play, but just as Google did, the company realized it had to jump in its own hardware offering as well.

In June, Microsoft announced the Microsoft Surface, in Windows RT and Windows 8 flavors. It was a big move for the company, and yet it came with a unique spin.

Microsoft showed it isn’t interested in just tablets used for consumption; the company also wants to ensure they can be used for productivity. As such, the Microsoft Surface can be purchased with an attachable keyboard, something that most Windows RT and Windows 8 offerings will likely sport.

A game of price, size, and services

On top of all that, many of the older versions of these tablets are still available at heavy discounts. As we’ve discussed before, there’s a price war going on, and the consumer is the one to benefit in the end.

Furthermore, the depth of tablets significantly slimmed down, while the width and height options continued to increase. Previously, you had to choose between either a 7-inch or a 10-inch, and this likely meant switching brands as well, but 2012 has brought various offerings in between those constraints.

Yet the most important difference among all the tablets in 2012 was the ecosystem. Each of the big five had its own offering and accompanying services, which only continued to expand as the battling powers try to differentiate their screen slabs.

You’ll notice we didn’t mention anything about the patent battle, which had some notable points in 2012. Yet it did not start this year, nor will it be resolved anytime soon. Furthermore, we feel it is a much larger technology issue that has much broader implications.

The patent fight will undoubtedly influence the next year, and the years to come, but it has become more and more clear that will also not stop any of the big five from moving forward in the tablet space. Selling tablets is simply too enticing.

In terms of the tablet market for 2013, it’s difficult to say what will happen for certain, but some basic trends are already apparent. Apple will keep refreshing its tablet offerings, keeping its prices higher than the rest, but ensuring higher quality end-to-end solutions.

Google will focus on its own hardware offerings, as well as accompanying servicers, and will very likely work closer with Motorola. Samsung will continue trying to replicate its smartphone Android strategy in the tablet space, Amazon will keep undercutting everyone and doing its own Android thing, and Microsoft will push forward very hard with its Windows 8/RT strategy.

All of this can’t last. With five lumbering giants throwing their weight around, someone is bound to get hurt. When that happens, it won’t be pretty.