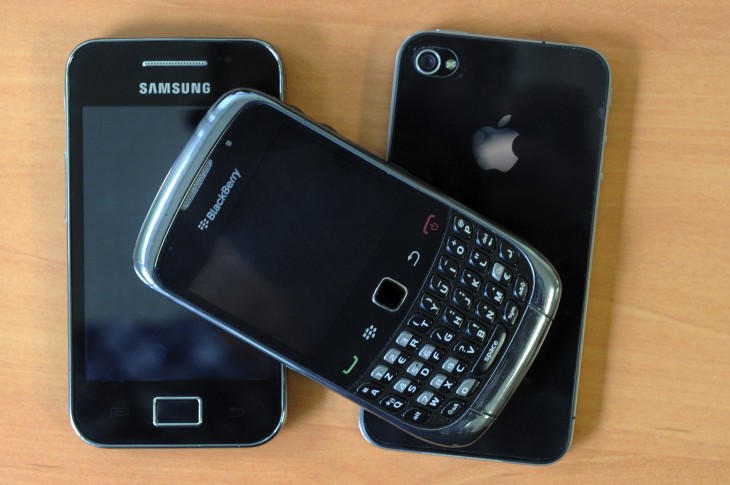 Want to take a look into the future of mobile? The United States Patent and Trademark Office is a veritable crystal ball, filled with innovative and exciting inventions developed by some of the biggest names in tech.

While some of the applications are so fantastical they seem like something out of a Phillip K. Dick novel, there’s plenty of real and practical gadgets that could be in our hands sooner than we realize.

Sure, it’s safe to say that the American patenting system is a flawed experience. Over the years, as companies like Google and Apple jockey for the right to claim proprietary technology in their mobile products, patent acquisition has morphed into an arms race that rewards gaining as many patents as possible as soon as possible.

And, when IPs collide, the legal systems in place act more like the startup version of war, with one company emerging the victor and the other struggling for a miracle to survive. One need only look at the continuing showdown in courtrooms all over the world between Samsung and Apple to deduce that it’s a jungle out there.

On the other hand, aside from the flaws, patents can often be the best evidence of what major mobile companies are planning to put in your pocket (or on your face or in your home) within the next five or ten years. This is, of course, a symptom of the patent system: companies are racing to place a stake in the latest and greatest technology, and once those strides are made, it’s important to lock in intellectual property than bet on a competitor. And with more than 247,000 patents filed in 2011 in the U.S. alone, and more than 500,000 internationally, there’s plenty to chart for the future.

Within the last year, mobile companies have been hot on the trail of three major trends that are bound to be pushed to market within the next few years. Companies are scrambling to grab pieces of these innovations to call their own, making them perfect candidates for the next big thing — and the next big showdown.

Haptic technology isn’t something that the staunchest of geeks and makers would call a new innovation, but recent patent filings indicate that touch sensitivity will undergo a radical revolution in the next few years. And, if these technologies make it into stores, we may be dealing with not only smarter touch sequences but also a venture into 3D space.

It’s unsurprising that one of the most consistent and persistent hounds of haptic technology is none other than Apple. Within the last year, the company has been approved for three separate patents regarding sophisticated haptic technology, indicating that the touch mechanisms for the iPhone 6 and beyond (and even future iterations of the iPad) will be very different. Among these strides is USPTO application 20120105333, filed in May of this year, which details an intricate and multi-tiered system for haptic feedback. The patent outlines a system with layered screen systems that enables the smartphone to spontaneously produce buttons. In short, the display itself — which Apple notes could be achievable with flexible OLED screens — could raise and reshape itself depending on the user’s needs.

Motorola has produced similar IP regarding haptics, albeit with less of a sci-fi feel. Rather than relying on a morphing screen, the company’s USPTO application 20120169612 instead discusses a “touch and nudge” interface. Compatible with a rigid display or a more flexible one, Motorola’s method aims to produce an alternative to traditional smartphone gestures such as swiping, tapping and pinching by allowing users to place a finger on the screen and gently press. According to the patent, sensors underneath the screen will be able to read the motion similar to a button being pressed — essentially mimicking that feedback.

Either way you slice it, we’re going to enter a phase where our phones will blur the digital and physical divide. In future, phones will be able to actually morph and respond to our touches, recognizing subtle motions and producing solid feedback. Imagine typing on your smartphone keyboard and actually feeling the keys, or producing a layered image right from your pocket. Haptics is heading that way, and it’s an exciting adventure.

The lifelike feedback of the phone of the future will come in handy, as the public is bound to be reaching for their phone more than we ever thought possible. Of course, the concept of complete technology integration into the facets of our everyday lives isn’t too much of a stretch already: one need only look at the integration of NFC, the deployment of Google Wallet, and Apple’s new Passbook feature in iOS 6 to get the gist of the situation. But it seems that patents are reaching beyond simple information integration and dipping into technological communications with many of our other everyday devices — and possibly ourselves.

Once again, the folks over in Cupertino are getting their hands on some major intellectual property regarding digital information transaction and integration into other technology. One destined to make an appearance in the near future is iWallet, an often-rumored concept that is actually a boosted version of the Passbook and has a multitude of patents that go back to 2009.

But Apple is also focusing outside of commerce and into mobility — specifically with porting hardware technology into some pretty convenient places. An example of this is USPTO application 20120124157, which details (of all things) a steering wheel remote control for iDevices. On the surface, the integration of a proprietary remote in a vehicle doesn’t seem like anything more than an accessory, but given the iPhone 5’s advances in turn-by-turn navigation and the ever-improving internet, Apple could be positioning itself for being the go-to device for communication, commerce, and transportation.

But both of these developments are relatively tame considering the new patent Nokia has been granted. It appears that all the way back in 2009, the cell phone giant filed patent 20120230672, listed with the relatively mild title “Optical Network Element.” But the proprietary technology that lies within the patent, which was granted in May this year, actually is for a vibrating magnetic tattoo.

Wearing the tattoo (or perhaps injecting; the patent’s language is relatively circular) could provide a new way to be alerted to a phone call or a text message. The patent also considers the concept of producing different kinds of pulses to separate the identities of different callers — similar to the way a ringtone works. This is just one form of technology integrating with an individual’s physicality — albeit a relatively extreme one. But there’s mounting evidence that indicates people are interested in their mobile phone becoming an extension of their own bodies, and it could be a trend of the future.

Explorations into these IP ventures indicates that perhaps using the word “phone” is an insult to the mobile device of the future. Companies are interested in producing the first true omni-tool: Sure, it can make your phone calls, but it can also pay for your latte, help you drive your car and give you alerts from a tattoo. As we seek more ways for mobile to aid our lives, we are opening the door to living a completely connected future.

One of the biggest puzzles in pushing the mobile device of the future to market is understanding not only what it will do, but what it will be made of. Patents are streaming in from major mobile companies regarding the world’s most cutting-edge materials. This is where the battle for the phone of the future will be won and lost — proprietary use of this technology can mean the upper hand in the courtroom.

It’s hard to imagine a future mobile device without an OLED display. Lightweight, flexible and capable of producing a visual display of amazing quality, OLED is the next step in “improving” retina-quality display. In order to capitalize on this concept, companies are producing patents to gain proprietary access to methods of controlling the powerful technology. One of these companies is Research In Motion — a company that doesn’t often stake IP ground in cutting-edge technology. The company’s USPTO patent 20120218314 deals with the finite circuitry in running, and quickly cutting, the power in an OLED display.

Although the IP seems minute, it underlines an important point about patenting technology: holding a unique method of access, development or execution is an opportunity to gain the upper hand in a new material. Another example of this process would be the multitude of patents that solely concern applicable phone gestures — the exact contention point between Apple and Samsung. By gaining a patent on OLED now, Research In Motion stands to have an easier time integrating OLED into its future devices.

Another drool-worthy component that has companies clamoring for stake is the super-substance Graphene. Discovered by scientists in 2004, graphene is a single sheet of atoms shaved off of a simple graphite pencil, but it belies so much more. It’s super-conductive (about 100 times the conductivity of copper), it’s transparent and it’s an ultra-efficient transistor; above all, graphene has the potential to make everything more electric.

The allure of this material certainly appealed to Nokia, as it filed USPTO application 20120205518 in early 2011 to take advantage of graphene’s structure for a super-sensitive photon sensor. In use, this graphene sensor would be used in the mobile phone’s camera to enable taking photos in very low light and ultimately result in crisper and cleaner photos. This is just one example of how graphene could change the makeup of a mobile device, but it is not the only one — as scientists continue to discover the material’s potential, tech companies will be ready to put it to use.

Cutting-edge materials are essential in developing the phone of the future, and they have the potential to be some of the most sought-after IP in the entire industry. The company that gets its hands on the most efficient and innovative uses of new materials will also be the most successful company, so all are jockeying for the position to simply keep surviving.

Understanding the gravity of patents is essential to understanding how companies are approaching the mobile device of the future. Although we may not know what the future of mobile holds, it won’t be in your hand unless its solidified on paper. And, if you’re interested in what could be next, it’s time take a look into the government’s veritable crystal ball.

Read next: How Obama's reelection may spur work on cybersecurity in the United States