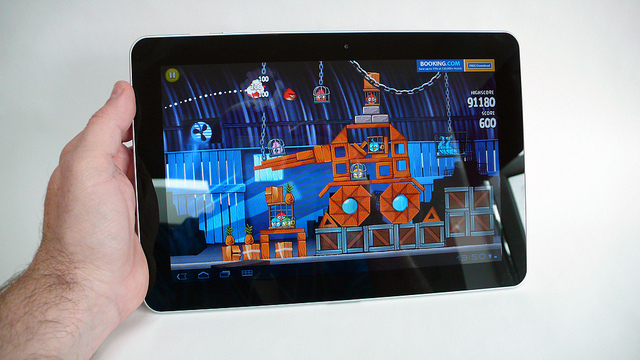 Samsung is expected to debut what could be the biggest tablet device on record with the addition of an 11.6-inch portable to its Galaxy Tab range, AndroidAndMe reports.

In a market where smartphones are getting bigger and manufacturers are experimenting with different tablet form factors, Samsung looks to set to raise the bar with a device that is a full inch-and-a-half bigger than other offerings, raising questions as to whether vendors will set a limit to how big they will make them.

AndroidAndMe states that there is more to its report than rumour, noting it actually saw the device at this year’s CES 2012 expo and the 11.6-inch Galaxy Tab could be about to make its debut at Mobile World Congress (MWC) in February:

I visited with Samsung System LSI during CES to discuss their upcoming Exynos processors and I saw one of their prototype tablets which was powered by Exynos 5250 and already running Android 4.0. I actually took pictures of the device (not really knowing what it was), but I was politely asked to delete them from my camera after the briefing was over.

This prototype was said to be powered by a dual-core 2 GHz Exynos 5250 processor and features a WXQGA (2560×1600) resolution. The tablet is expected to debut with the latest release of Google’s Ice Cream Sandwich software.

With a lot of focus on whether Samsung will unveil the Galaxy S III at MWC, the Korean electronics giant appears to be looking to deploy new devices across its portable families, with a larger-than-average tablet thought to be amongst them.