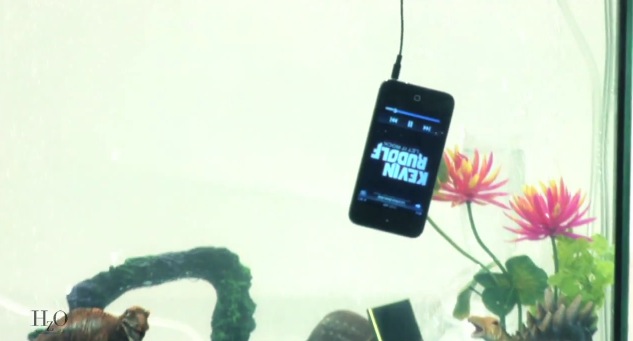 This year’s CES expo in Las Vegas brought us the very latest in gadgetry, mobile and consumer electronics, helping form a trend for the coming year. Televisions are getting thinner, smartphones bigger and more powerful and rappers are going all out to showcase their new headphones but there also seems to be an obsession with waterproofing things.

According to a report by Pocket-lint, smartphone giants Apple and Samsung are looking at new technologies that could see their next wave of smartphones become impervious to water damage. The technology, called HZO, protects devices by creating a nano-scale film barrier “which has special water repelling properties once applied to the inside of electronic gadgets”.

This, followed by announcements by Fujitsu, Pantech and Toshiba, made for a pretty interesting development in mobile devices coming this year — they will all likely be waterproof.

Smartphone makers are tasked with leading the way with technological developments, making us believe we need a feature when the thought of it hadn’t even entered our minds, but is making smartphones waterproof what consumers really want?

The answer is of course yes, any smartphone user would love to be able to use the toilet (standing up or sitting down) without the threat of destroying their £500 iPhone 4S, but it’s something that should come as a default feature, not a unique selling point.

Would you rather have a smartphone that didn’t smash when you dropped it or was waterproof?

99% of replied sided with “smash proof”, or a similar response. Many would gladly take both features, considering there are now coatings that can protect electronics without the need for additional cases or protective covers.

@m4tt One that didn’t smash. I’ve only dropped one in water, and I don’t think I’ll make the same mistake again.

@m4tt drop-shatter-proof all the way! Unless I become a coastguard or a fisherman, water is low risk; concrete high.

Smartphone vendors recognise that their devices are as strong as their weakest point, so have taken to including Corning’s Gorilla Glass in the devices. The technology, an alkali-aluminosilicate sheet glass that is engineered to be thin, light and damage-resistant, was used in more than 20% of the world’s 200 million mobile handsets sold in 2010.

HTC, Samsung, LG, Nokia and Motorola are already using Gorilla Glass in their devices, Apple is said to be using a derivative of the technology in its iPhones. Corning unveiled Gorilla Glass 2 at CES, showcasing a new ultra-light, ultra strong glass that is 20% thinner than original Gorilla Glass, measuring just .8mm thick compared to 1mm.

The glass is going to get thinner and enable devices to become more responsive, but it’s strength is said to be similar to its predecessor — not great when you look at the number of smashed screens reported by mobile device owners across the world.

Granted, smartphones and tablets are a lot more durable than people expect them to be, but they aren’t all quite as impervious at the Motorola Defy when dropped, subjected to water damage and left to endure the elements.

A waterproof phone is a cool feature, but it’s not what many will look for in a smartphone. Make the iPhone or the Galaxy Nexus able to withstand a stampede of elephants without making me add an ugly case or weird-looking protector and me and a large percentage of this website’s readers will throw their money at you.

Read next: 11 useful tips for marketing your brand on LinkedIn