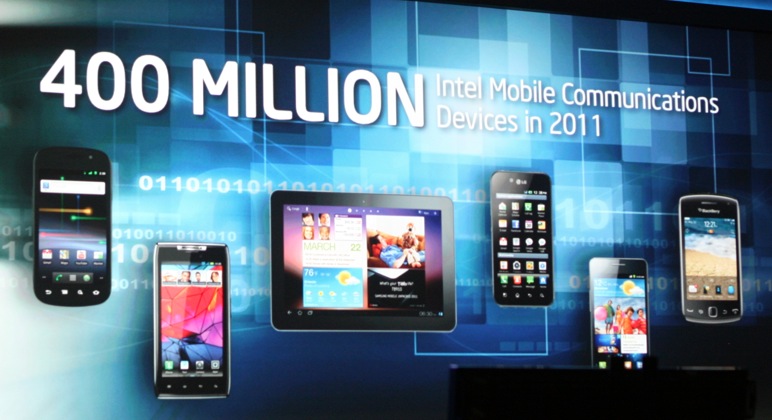 There’s a funny thing that happens at almost any tech conference – the Internet sucks. It would be ironic, but it only seems to make sense that thousands of geeks in a single area can kill an Internet connection. But the up shot to that is that I have had time to digest the Intel keynote today, because I couldn’t blog it while it was happening.

I have to admit, first off, that I was exceptionally close to skipping the speech. Matthew Panzarino and I figured that it would be a rehash of ultrabooks and Intel hyping the forthcoming Ivy Bridge chipset. To us, and to readers at TNW, these aren’t exciting topics. But due diligence won out and we headed in to get a front-row seat.

That’s a true sentiment. Not some ironic thing. I was blown away by what Intel is doing, but mainly because of the impact that it will have on an entire ecosystem instead of just a single company. The company made a load of announcements, but one stuck out as being simply huge –

The Medfield Atom processor is now inside Android phones and tablets. That’s a 1.6 gHz processor, combined with a 400 mHz graphics chip.

Before you blow this off as a “so what?” moment, take a minute to think about the life of Atom. Originally released in 2008 as a low-power alternative to traditional processors, the Atom was placed inside a wealth netbooks, “nettops” and other handheld devices. Over time, they became increasingly faster and more capable, landing them into the hearts of many people who wanted decent battery life and decent power to meet in the middle.

Intel is exceptionally good at making computer chips. That shouldn’t come as anything less than stating the obvious. So taking that level of expertise and then meshing it into the mobile computing market can lead to big things. From the demonstration that we saw today, even the early versions of the phones that are powered by Intel look exceptionally promising:

Now bear in mind that we saw this today on a phone that is a “reference design”. That means it’s not going to be released. Ever. It’s just a model from which other phones can be crafted. Early testing shows the processor absolutely stomping the current competition, and smarter power management should help to extend battery life beyond what’s presently seen from “fast” chips. Oh, and bear in mind that the Medfield is a single-core chip. That’s hugely impressive.

We did see (and got to go hands-on with) a Lenovo device that’s using the Atom processor. To say that it’s fast is an understatement. It screams. Though there’s no plans from Lenovo to release the device in the US or Europe, it’s going to get a trial by fire on China Unicom, one of the largest carriers in the world.

But Intel has gone beyond simply dropping new hardware into an otherwise-similar device. The company has put dedicated resources into software, too.

Intel is no stranger to software; a fact that many people forget. For the past few years it has run a very successful app store called AppUp, where software of many flavors can be directly sold (or given away) by the respective creators. Intel went to work slimming and customizing Android to its own liking, creating what it considers to be the single best version of the operating system to date. From the demonstrations that we saw, it would be hard to argue that claim.

This is something that Android has been sorely missing. The fact that Intel has now jumped both feet into the ecosystem by not only providing hardware but also tweaking software just gave the world’s market-dominating smartphone OS a sizable boost of support. Google wasn’t in the position to do it and no other handset maker could either. It is solely Intel who is in the spot, and now has taken the leap.

But let’s take things a step further. Motorola Mobility, the company that Google wants to snag in order be the owner of its hardware side, is now partnering with Intel. Moto has had some rough times in the past couple of years, after an initial hit with the original DROID device. Lagging sales have allowed Samsung to eat the company’s lunch, but a strategic partnership to run the Atom chips in Moto phones might very well change the landscape.

I’ve long held the argument that Microsoft should start making its own high-end hardware to showcase Windows. I firmly believe that Apple has put itself into a unique position in controlling the hardware aspect of its devices. Google is now a dotted-line signature away from being in the position to do this very same thing, and it’s going to do so with an inarguable leg up because of Intel’s commitment to the platform. This is big. Whether you love or loathe Android is of no consequence. It’s still a huge move in the ecosystem.

The beauty of this is actually two-fold. Android and Intel will both benefit, but it should also drive innovation from other parts of the mobile ecosystem. Manufacturers are going to have to either pay the piper to use Intel chips for the speed and power-sipping nature, or they’re going to have to come up with something better. Right now, the latter doesn’t seem to be a viable option.

Keep up with all things CES 2012. Bookmark this link to read all of our coverage.

Read next: Ever wonder how to stop forgetting phone chargers? Perch has your answer [Video]