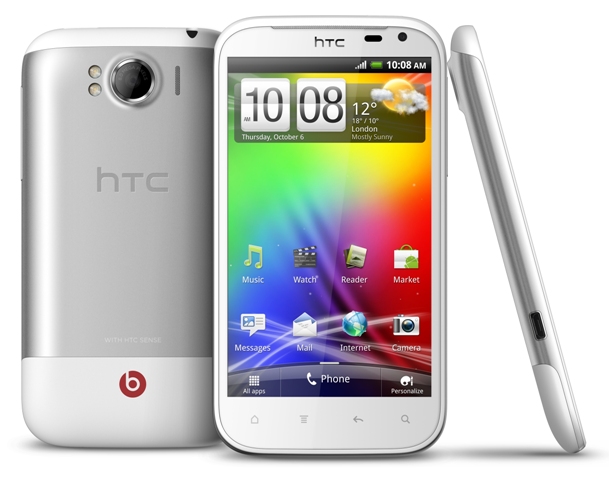 HTC has today announced its new flagship Android handset, the HTC Sensation XL, finally confirming the release of the giant 4.7-inch smartphone that many will have known as the HTC Runnymede, debuting another of Beats outfitted device that has entertainment as its heart.

The Sensation XL is the third Android handset baring the Sensation name, suggesting that HTC is looking to solidify its smartphone presence with a range of devices under the same brand — mimicing Apple’s iPhone and Samsung’s Galaxy brand.

The Sensation XL measures a whopping 4.7-inches diagonally, the same size as the recently launched Windows Phone-powered HTC Titan, and its unibody design is crafted from a single sheet of aluminium. Inside, the Sensation XL boasts a single-core 1.5GHz Qualcomm MSM8255 and 768MB RAM, making sure to capture sharp photos with its 8-megapixel camera, which features a f/2.2, 28mm wide-angle lens with BSI sensor to fit into every shot and giving better low-light performance. It will also capture 720p HD video.

Pushing the handset firmly towards consumers that want to be able to watch films and listen to music on their devices, HTC has made sure to bundle its HTC Watch service, which allows for the downloading or streaming of thousands of films and TV shows.

None of that would be worth anything if it didn’t have a unique Beats feature-set. With this in mind, HTC has worked with the Beats team to create a customised set of Beats headphones called UrBeats, which are specifically designed for HTC’s new Sensation smartphone.

The decision to utilise a single-core processor and embed less RAM than the Samsung Galaxy S II and new Galaxy Note, may have some leaning towards the Korean manufacturer for their Android fix but the HTC Sensation XL is tailored especially for music and film fans, with its specially designed UrBeats headphones – tempting those with a weakness for the Beats brand.

HTC says the Sensation XL will be available across EMEA and Asia Pacific from early November. In the EMEA regions, HTC will also be offering a limited edition bundle that includes special edition Beats Solo headphone, with O2 said to be offering these to some of its first customers.