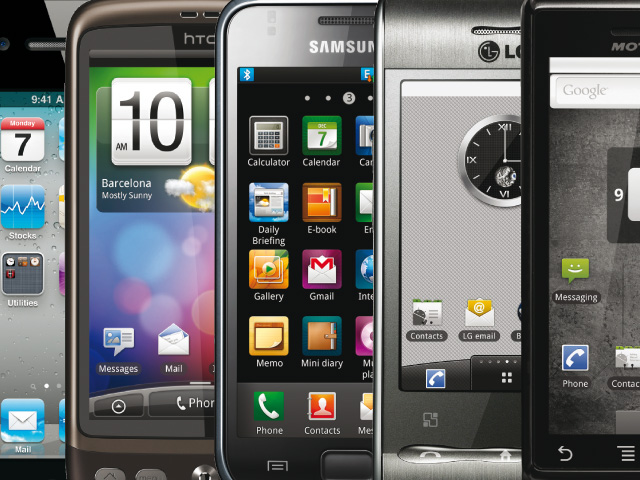 July saw many of the world’s major smartphone manufacturers post their second quarter financial results, documenting how they had faired in an increasingly competitive and consistently growing market.

Apple and Samsung posted highly encouraging handset sales, grabbing first and second positions as the world’s top smartphone vendors in terms of sales. HTC posted another record quarter but Nokia didn’t have such a good time of it, with smartphone sales falling 32% year on year to place the company as the third biggest smartphone maker by volume, having previously enjoyed top position.

Sales of Apple’s iPhone topped 20.3 million units, not only beating Nokia’s sales in the second quarter, but outselling the company’s entire range of smartphones by a considerable margin.

Apple hasn’t found itself leading the smartphone race by chance; it effectively changed the modern mobile phone by fusing the best available hardware available with a polished, user-friendly operating system that compartmentalised the functions of a phone and allowed the users to quickly and efficiently navigate the options available to them. The fact that Apple popularised the touchscreen didn’t hurt either.

Its rivals have enjoyed success, but the four smartphone manufacturers trailing in Apple’s wake have attempted to mimic Apple’s success by utilising Google’s Android operating system – a platform baring startling similarities to Apple’s iOS operating system – maintaining a regular release cycle to not only surpass their competitors but also appeal to customers that are wanting to upgrade from their existing smartphone to a newer, more powerful handset.

With Apple threatening to capitalise on its popularity and put a significant gap between it and its competition, its rivals could steal a few pages from Apple’s playbook to boost sales – one being the the way they develop and release new smartphones. By shifting the focus from numerous handset launches each quarter to more concentrated release cycles with a small number of devices that truly encompass the very best design, the latest hardware features and the newest innovations in mobile operating systems.

Is That A Droid?

Despite a massive increase in Android smartphone sales, only a limited range of handsets have captured consumer attention.

Samsung, a manufacturer second only to Apple in terms of smartphone sales, released the second iteration of its Galaxy S smartphone in May, launching a market leading dual-core handset that capitalised on the success of its predecessor to ship more than 5 million units – without even launching in the U.S.

The Galaxy line has become Android’s most well-known brand in a market where brands are noticeably absent. Google used its massive technology presence to debut its Nexus range of Android smartphones, but even then the handsets have been produced by a different manufacturers in HTC and Samsung. The same can be said for the Droid brand, which saw US mobile operator Verizon try to differentiate itself from the numerous other Android devices in the market by licensing the Droid trademark from Lucasfilm, to give consumers a sense of what device they were buying.

But even with the Droid trademark, US consumers appear unsure with just what makes their smartphone a “Droid” smartphone. Both HTC and Motorola have offered Droid devices in the past couple of years, fragmenting the brand, leaving its owner with the impression that a device running the Android software must therefore be a Droid.

Keeping a smartphone portfolio small may reduce the ability to sell tailored handsets to specific market segments but in today’s market consumers may not want to be told what their smartphone can or can’t do – Nokia knows this all too well.

At the beginning of August, Nokia made an announcement via one of its official blogs that it had adapted the way it names its smartphones, dropping classifications and employing a completely numerical system. The company explained that it believes its users don’t want to be told what they can do with their phones and with smartphone platforms able to perform multiple functions, it found that its classifications “didn’t match-up to what people were actually doing with their phones”, and so moved to simplify its naming policy.

The Finnish mobile giant adopted a naming policy that now indicates the price but also the feature set of a handset, making its 900 series of devices its most powerful and its 100 series the most accessible. The second two numbers of the name will provide a unique handset identifier, effectively giving Nokia the chance to release 99 phones under that point.

It is possible that the company will use this new naming policy to better label its new Windows Phone devices, but with a numerical system, the company goes back decades to a time when it was the undisputed king of the mobile phone market. With smartphones assuming brand names like iPhone, Galaxy, Droid and Nexus, telling your friend that you “just bought the new Nokia 932” isn’t going to inspire much confidence.

According to Asymco’s Horace Dediu, smartphones contributed to 30% of global phone sales last quarter, a massive increase from 2007. The large number of Android handsets on the market helped secure a 14.2% for Android, the iPhone obtained 5.6% share, with Symbian 4.6%, RIM 3.6%, Bada 1.1% and Windows Phone 0.4%.

As Dediu points points out, featurephones and other mobile devices still hold 70.5% of the market, highlighting the “challenge remaining and the progress being made”.

This demonstrates that the market isn’t all Apple’s, it certainly isn’t Android’s either. The good news for any one of the smartphone manufacturers that is competing in the market today is that the non-smartphone market is no longer growing, whereas the smartphone market continues to boom. However, the opportunities open to HTC, Samsung, LG, HTC and RIM are also the same for Apple, which is reportedly lining up a new low-cost iPhone to tempt the remaining 70.5% to buy an Apple-branded smartphone.

There are a number of key factors to Apple’s success with the iPhone, but the decision to launch just one device every year could be seen as the number one reason for its success. With one device to focus on each year, Apple has been able to research, test and use highest grade of hardware available to it, using its early successes to reinvest the revenue it accumulated from its early iPhone and booming Mac sales to not only secure exclusive rights to output production of the most technologically advanced components available to the market.

This isn’t to say that Apple’s rivals couldn’t do the same but with more than ten product launches a year, backing a new trend in smartphone computing could prove disastrous (we could perhaps include 3D in there somewhere) when you are designing, testing and launching handsets in the double digits.

I talked above about how Apple changed its release strategy by pushing back the release date on its new iPhone. With other manufacturers rushing to get the next industry leading (on paper) smartphone out to market, Apple’s decision to rethink its release actually helped the company accelerate sales of its iPhone because it had not limited supplies of the smartphone prior to the launch of a new device, something it had done for each new product iteration before that.

What Apple did this year was open the taps on production of the iPhone 4 as it extended its lifetime beyond the traditional 12 months. In other words, the pipeline was not “drained” ahead of a new ramp. Distribution was also boosted with a burst of new operator deals which actually enlarged the pipeline.

So we are witnessing a pivotal moment in the product’s strategy. By slightly lifting off the gas in terms of product cycle, Apple actually set the iPhone loose. The imposition of a yearly cycle on the product coupled with unlimited demand caused it to be artificially constrained.

So I can only reach a conclusion dripping with irony: by stepping off the gas the product actually accelerated.

This phenomenon will allow the company to unleash a wave of unprecedented growth which might claim another theory as victim. Namely, is the limit of 100% growth about to be breached?

With so many devices on the market, Apple’s rivals may not have the same level of control over the production of their handsets and they may not have the cashflow to be able to facilitate such a choice it if they did.

Fewer models would – over time – result in lower production costs; a manufacturer would be able to establish agreements with suppliers and the companies that produce their devices, in turn forming a deeper relationship and resulting in a more polished product. Apple, with its ever-growing cash reserve, has been known to invest heavily in the production costs of its new devices, allowing for it to benefit from increased production volumes and a reduction in production cost.

If a company has a limited number of handsets to focus on, it is able to establish a foothold in the market based on price but also make more money as a result.

However, if some vendors continue to compete as they are at the moment – by chasing shipments instead of profit – then it could become a race to the bottom on who can offer the cheapest smartphone, pushing out any chance of innovation and differentiation in the market.

Many smartphone manufacturers are forced to innovate their devices, not the platforms they use to power them, because they share the same operating system. With a greater focus on the overall experience and a limit on new smartphone launches, companies can take the time to differentiate their products both in terms of handset features and the software that runs on them. This has started to happen with HTC’s Sense UI and other features but with new releases of Android coming in the future, it has become difficult for vendors to keep up with the latest Google updates.

The smartphone market is still growing and will continue to do so as the non-smartphone market continues to decline. There is a huge potential for growth here both in terms of market share and profit. Apple will continue to sell massive amounts of iPhones, and if it is able to produce a model that is more cost-effective for emerging or pre-paid markets, it may even throw its hat into the ‘market share leader’ ring that it dominates with its iPod products.

But for now, the company seems content to leverage its pipeline investments and laser-focused product line to garner the lion’s share of profits.

Apple’s competitors now have a choice to make. They could continue to strive after pure market share by producing more and more models of handset, making sure that they attack every possible need and price-point. Or they could focus their efforts on fewer handsets and make them both more polished and more profitable.

In the end, fewer handsets of a higher quality seems to be the answer if they want to imitate Apple’s model. But the requirements for success here are more involved than simply winnowing down their lineups. They would also need to find a way to emulate Apple’s pipeline prowess, which is no mean feat. The most important missing piece of the puzzle, however, may actually be the fact that very few manufacturers produce both the hardware and the software to run it.

At the moment only HP and, hopefully soon, RIM are controlling their software destiny along with their hardware. If a manufacturer with existing success, like Samsung, were to find and nurture its own polished OS, we may again see more than two major choices of platform for consumers.

Read next: The BBC launches a new TV-friendly version of iPlayer