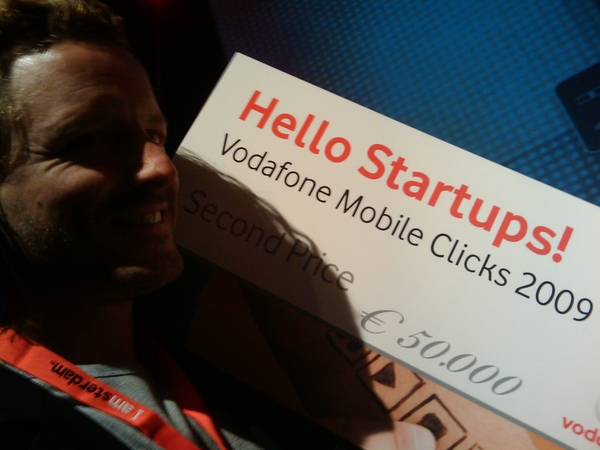 As we told you a few days back, the time to enter the Vodafone Mobile Clicks competition is coming to a close. The competition, announced at The Next Web conference, allows any startup with a mobile app or service in 7 different European markets to apply and compete for €225,000 in prizes.

In addition to the opportunity to win cash to help fund their app, contestants will also get judged and receive feedback from a great set of jury members that include mobile industry leaders, company founders and venture capitalists. This should go a long way towards helping developers refine their approach to making their app more accessible to customers and investors, as well as provide valuable pitching experience.

Previous winners of the competition, in its third year, include 2010 winner Cardbmobili and 2009 winner Layar. Picking these winners requires a set of set of talented judges – this year six industry professionals will come together to decide who wins Vodafone Mobile Clicks 2011.

We took the chance to speak to one judge, namely Lee Epting, Vodafone’s Director of Content Services, about what she believes is the future of mobile, also discussing the impact that smartphone apps have had on her life.

What do you believe is the future of Mobile?

It’s about the mobile device, the PC, the tablet, and the TV becoming cross platform to an extent; shared services and content that seamlessly runs across each without any hassle. On top of these channels you also have mobile-to-mobile communication which, combined with the masses of data out there, will make mobile devices even more ‘smart’.

Why do you think apps have become so popular?

Apps have become popular because they take the mobile beyond just being a phone. They allow us to get to the information we want simply, quickly and effectively. Given that it’s harder to do so many things with the limited time we have in our lives today, apps allow us to focus our needs to get the things we want on our terms – and generally with a lot less effort.

What are your favourite apps/which apps have changed your life?

It sounds clichéd but I love Angry Birds. I’m hooked! I also like more ‘useful’ apps like Shazam that meet an immediate emotional need, watching the race begin at the touch of a button as folks try and find out the name of a track before it finishes.

Apps have an incredible way of taking us to the next ‘action’, often subconsciously. Maybe I’ll need to buy the big black Angry Bird just to get past a level. Or maybe I’ll buy the song that my app just tagged. This to me is the future economy of mobile.

Do you think apps will reach a tipping point? If so, what could be the next big thing on our smartphones?

The future for apps looks incredibly exciting. We have not reached a tipping point because the market is still young and pretty fragmented. What we will see is more apps going from native apps to browser based apps, leveraging HTML5. Why? Because you can get the same rich platform to develop on but you are not dependent on the underlying OS, which is becoming more and more fragmented if you look at Android, for example. As HTML5 becomes more and more feature-rich and as devices become more and more powerful it will become more difficult to distinguish between a native app and a web app.

When it comes to the money side of things, you’ll see an evolution of digital currency. There will be more apps that leverage freemium models using features like in-app billing, gifting, loyalty programmes, coupons and much more.

What qualities must an app have for you to consider buying it? What factors assist you in buying apps?

Crucially, the app must have an engaging and well thought out user experience. I have a good friend who I worked with and he designed the Palm UE back in the early 90s. One of his contributions was a whitepaper called “How to Fit a Mountain into a Tea Cup.” In practice the mantra was “don’t just shrink, rethink.” Customise, customise, customise.

I like it when I see developers who have invested their creative energy in designing engaging apps that really take advantage of the device and browser capabilities. I remember when the first apps came that accessed the accelerometer in a device or the camera APIs, they were the beginning of thinking of a new way to use your mobile. Now we see new browser based platforms such as augmented reality which takes the mobile into being a real source of information in an interactive way. It just took “sight seeing” to a whole new level.

One Click and Charge to bill is a must for me to buy an app. I’m simply not interested in putting in a credit card or taking more than one simple step to purchase. I don’t want to log in or verify my credit card. It has to be straightforward and convenient.

The Vodafone Mobile Clicks contest allows any startup in Germany, the Netherlands, Portugal, the Republic of Ireland, Spain, Turkey or the United Kingdom that has a mobile site, service or application to apply and compete for a €225,000 prize fund. The winners of local judging will compete at the PICNIC festival in Amsterdam, where a winner will be chosen. You can read more about the contest here. Also keep your eyes on the site for interviews with some of the jury members of Mobile Clicks 2011.

Read next: RunKeeper opens its API allowing 3rd parties to tap into The Health Graph