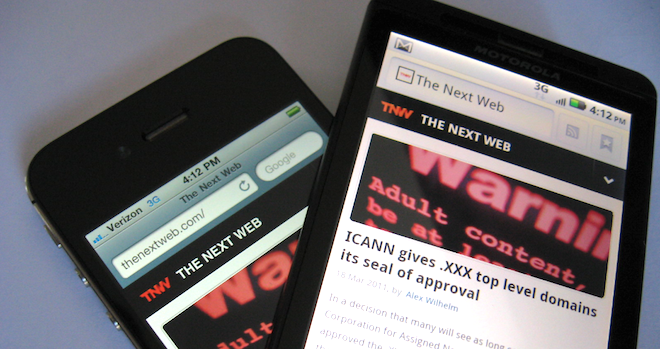 So here I sit, feeling slightly like a traitor. Only slightly, mind you. I only have this Verizon iPhone 4 for a few days. But, I’m a mobile fanatic and so it’s due diligence for me to try out the world’s most popular smartphone. I’d be remiss if I didn’t eventually get my hands on one so that I could offer you my real thoughts about why I prefer Android.

Until this point, my experience with iOS has been only with the iPod Touch. Granted, minus the phone part, the iPod Touch is nearly an iPhone. But I have a few things that don’t really translate all that well. First, I use Google Voice almost exclusively (I don’t remember the last call that I got on my actual phone number…whatever it is) and I also want to use some of the GPS-enabled applications. Obviously, this doesn’t work very well with the iPod Touch and its lack of GPS.

I’ve heard just about everything that there is to hear about why the iPhone is better. I’ve made just about every argument I can make about why the Android platform is better for me. Somewhere, I need to see if there’s a middle ground. So here I am, day one, setting things up and starting this trip to see where I end up.

It is worth noting, almost immediately, that there’s nothing in the world of tech that feels like an Apple product. The iPhone is no exception. It’s hefty, but not heavy and has a fit and finish that I’ve not seen in other devices. Even my standby favorite, Motorola’s DROID offerings, don’t really match up to how the iPhone is built.

The camera is beautiful, but that’s also no surprise. I have seen people sing its praises ever since it was released. In fact, our own Zee even said that it was the only reason to bother upgrading, when the 4 was first released.

Strangely, even though the phone feels great, it also makes me a bit nervous. Maybe I’ve just seen too many broken screen pictures for my liking, but it really feels as if the thing would shatter into a million pieces if I even dropped it onto the carpet. The fact that I’ve already busted the glass on a 4th generation iPod Touch doesn’t help this matter.

With my Android phones, I’ve beaten the ever-loving crap out of them from time to time. My long-term test unit for the Droid X came to me with a scuff on the screen, but even after my repeated abuse of the phone, it’s none the worse for wear. I don’t feel that sort of durability in the iPhone and that concerns me.

What really freaked me out about switching over to the iPhone was the integration of my Google accounts. In Android, it’s second nature. Fire up the device, add your email address and you’re good to go. It will even download all of your previously paid-for apps. There’s no need to tether it to a computer, and I’m especially fond of that fact. For Apple’s post-PC generation, it sure does seem that iOS devices are incredibly reliant on PC’s in order to operate out of the box.

What I have to hand Apple credit for, though, is having a truly unified inbox. Granted, on my Android devices, I use the Gmail application. The actual Mail app does indeed have a unified system, but the Gmail app is so much better than Android’s standard that it’s night and day differences. I do like the fact that I can add multiple Google accounts as Exchange accounts, thus pulling in my contacts, calendars and email. Using a unified system is great, if still a bit lacking. In order to get the actual phone notifications to work, I need to use the iPhone’s mail app. In order to do that, I have to bypass all of the extra features of using something made by Google for Gmail. Labels work, but not exceptionally well. There is no Priority Inbox either. These are two things that I rely on pretty heavily. I’ll either learn to live without them, or be constantly bugged by their absence.

Speaking of notifications, you full-time iOS supporters have absolutely no idea how bad your notifications are. They are rudimentary, at the absolute best. Android’s system for notifications is unbeaten, as of yet, and Apple could learn a lot by implementing something similar.

There’s also the fact of not having separate audible alerts for each of my Google account emails. I have 3 exchange accounts set up. Why can’t I get 3 different tones to know which one has mail? That would really help.

Other than these things, I don’t have a lot of gripes. Yet. I’m still not very apps-centric in how I use my phone, so that argument about the app availability differences doesn’t really phase me. I’m a big fan of the Google integration of the Android platform, and that’s going to be hard for me to break away from. Otherwise though, it’s still a very nice piece of hardware, with plenty of reason to like it.

Oh, but the keyboard sucks. Apple, get your head out of your tail and allow 3rd-party keyboards. Just check the code to make sure that it’s safe. That’s why you have such rigorous standards for the App Store, right?

Read next: An entire hotel built out of QR code and other great QR strategies