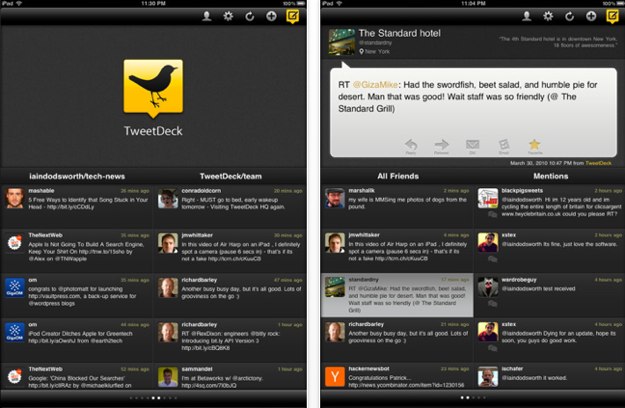 TweetDeck, will be relaunched on both iPhone and iPad devices within the next couple of weeks, bringing with it all of the much-loved features from its Android counterpart so that it will make the most of the iPhone 4’s Retina Display.

Posting to the offcial TweetDeck Blog, Richard Barley (Community Manager at TweetDeck) notes that the team have completely rewritten the iOS application from scratch so that will “raise the bar for iOS apps”, like it did with its Android app, taking the “level of quality and innovation” to build in “a whole bucketful of magic” to create a new TweetDeck app for iPhone and iPad.

The new app centres around the flexible columns which can blend mentions, Twitter Lists, Direct Messages and even Facebook feeds. The user will have complete control over what is displayed in their main feed, choosing to load them separately if they so wish.

TweetDeck is currently doing a final round of testing before it submits the application to the App Store, hoping to release in the “next couple of weeks”. TweetDeck founder Iain Dodsworth and Steve Summers, who handles TweetDeck’s Website and Partnerships, will be heading to SXSW later this week to share the app with 50 lucky attendees, so you if you are attending, you could be one of the first to experience the new TweetDeck iOS app.

Being big fans of the Android app, we have high hopes for TweetDeck for iPhone and iPad – we will of course let you know as soon as it is released.

Read next: What fonts are used in some of the web's most famous logos?