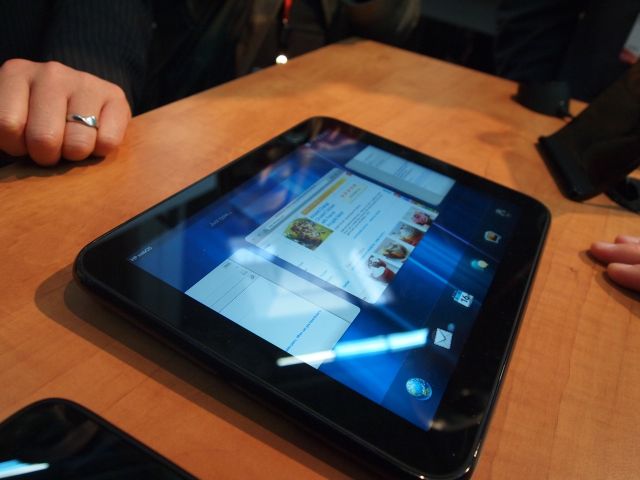 If you were to take a look at HP’s new WebOS-powered TouchPad and RIM’s upcoming BlackBerry Playbook, you might notice that the two operating systems have distinctly similar features and interfaces.

LaptopMag noticed this too and highlighted the similarities which include RIM’s use of multitasking inside its QNX  operating system on the PlayBook, a system which displays open applications in separate windows (or cards as it is referred to on the WebOS platform), that can be closed by swiping them off of the screen.

Both operating systems have their own unique ways of delivering a unique touchscreen experience. In such a competitive market, manufacturers and developers look to incorporate similar features to their rivals in an attempt to provide a familiar experience whilst innovating in other areas.

When asked to comment on similarities between the two tablet experiences, HP’s and RIM’s responses were understandably quite different:

HP’s Jon Oakes, Director of Product Marketing for the TouchPad:

From what we’ve seen in the market, there are some uncanny similarities. It’s a fast innovation cycle and a fast imitation cycle in this market, so we just know that we have the creative engine here to continue to build on what we have, and we’ll keep innovating, we’ll keep honing and those guys hopefully will continue to see the value in it and keep following us by about a year.

I feel that we set out from the ground up to define a user experience that we felt would delight our customers, and we landed in a place that may look like other competitive devices. But there was no intention and no preconceived notion that this is what we want to end up looking like. In fact, I think QNX had that design lined up before we even started working with them.

You know, cars over time end up looking a lot alike because you put them through a wind tunnel, and when you’re trying to come up with the best coefficient to drag ratio, there’s one optimized shape that gets the best wind resistance, right? Well, when you’re trying to optimize user experience that juggles multitasking, multiple apps open at once and on a small screen, you’re going to get people landing on similar kinds of designs.

HP says there are “some uncanny similarities”, RIM says that QNX had the design “lined up before we even started working with them”. We believe the two ecosystems are vastly removed from each other, offering different overall experiences but its interesting to note how manufacturers perceive rival devices in the same market.

Both devices are expected to launch this year, with the PlayBook expected to hit the US market within weeks.

Read next: Apple hits out at Microsoft in App Store trademark debate