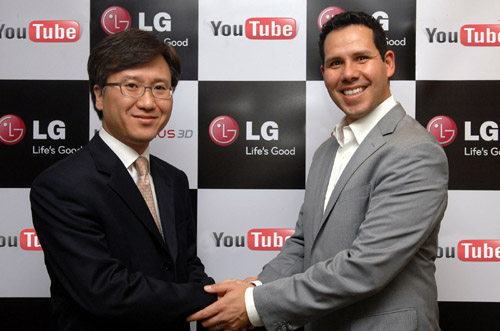 This morning LG announced it is to partner with Google-owned video service YouTube to deliver a unique 3D mobile experience to users, starting with the new LG Optimus 3D Android smartphone, due to launch at Mobile World Congress.

LG’s upcoming Android-powered smartphones will be able to capture 3D content and deliver them without glasses and its partnership with YouTube will ensure that users will be able to upload and share them instantly using the video service.

LG will demonstrate the new Optimus 3D smartphone at its stand at Mobile World Congress, it officially confirmed the device soon after it began to leak to numerous blogs. The handset itself will be powered by a dual-core Tegra 2 processor and will feature simultaneous dual-channel and dual-memory.

“3D technology has traditionally been reserved for the major Hollywood movie studios,” said Francsico Varela, Head of YouTube Platform Partnerships“With the new LG Optimus 3D anyone anywhere in the world can shoot 3D videos, upload them to YouTube and share them with their friends. We’re excited to see the creative videos our community captures and shares with this new technology.”

It will be the first handset to offer the YouTube 3D experience and will start shipping in the second quarter of 2011.

Read next: Motorola Xoom to get Spring European launch