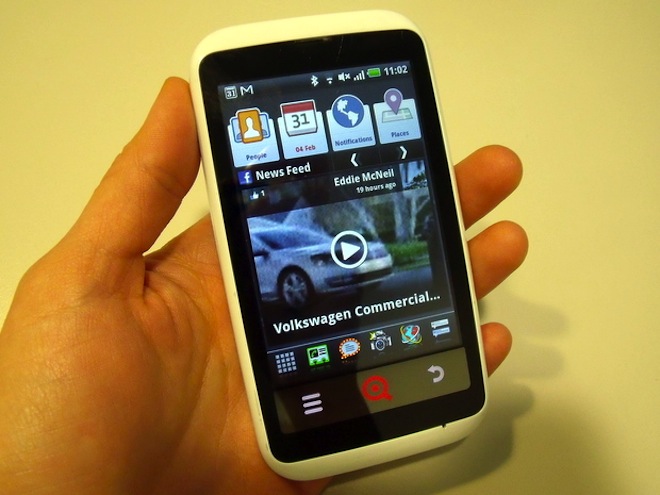 There have been lots of discussions and denials when it comes to Facebook itself producing a phone. The company has often said that it ultimately imagines all phones being heavily social and so a specific model is not the right way to go about things. However, whether it’s marketed by Facebook or not, the INQ Cloud Touch will undoubtedly be known as the Facebook phone.

From the start, you can see that there’s a heavy Facebook presence on the main screen of this Android-based device. Deep Facebook integration continues throughout, but there’s a decided lack of an actual Facebook shortcut. Rather, every panel of the phone in INQ’s UI will have Facebook integration. Want to watch videos on Facebook? Just click a video. The same is true with sending messages.

While the Faceb…oh, excuse us, INQ Cloud Touch is exactly what we thought we’d see, it’s refreshing to hear that it works as well as it should. Judging by reports from those who have gotten their hands onto it.

But the true story might not be the Cloud Touch. According to a report over at Electricpig, INQ’s CEO says that the company is “definitely” building an Android-based tablet. The CEO, Frank Meehan, makes no bones about his addiction to his iPad and it only makes sense that his company would come out with an Android-focused tablet to give more competition.

Tablets are a very strong market. I would say during the day my iPad and my INQ phone are the two things I don’t really want to be parted with…I can see the iPad is becoming an essential part of my life.

The ultimate question is whether or not prospective tablet from INQ would be another Facebook-centric device. Given the company’s penchant for marketing to a younger audience, we’d absolutely be open to the thought of it happening.

Obviously there’s no word yet on specifications or anything else about the potential tablet. Meehan made a very clear point in saying that INQ’s concern in a tablet investment lies in the fact that apps simply aren’t selling well enough to make it a great platform choice just yet.

We’ll keep you updated with what we find. For now, the Cloud Touch should be hitting the market soon so parents will probably want to knock back a couple hundred bucks just in case. Have a peek at a video of the phone, via TechCrunch and let us know your thoughts:

Read next: Create Engaging 'Contact Us' forms with Formsly