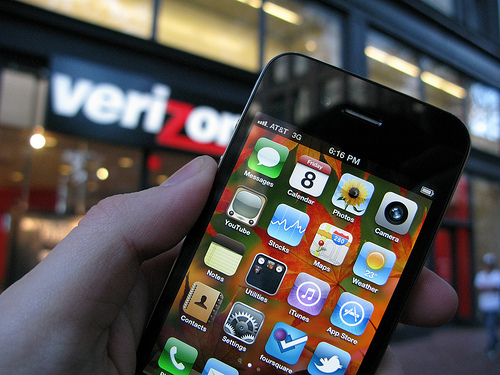 photo © 2010 jfingas | more info (via: Wylio)We’ve wondered about rollout speeds before, and given the launch in 38 markets, we knew that it would be somewhat fast. However, live from the stage at CES, we’ve just heard that Verizon will be launching LTE into 175 markets by the end of 2011. But what’s more important than markets, to us, are devices.

The latest count stands at 10, with all of them being launched by the middle of this year. 4 smartphones, 2 tablets, 2 netbooks and 2 hotspots. Of course, none of that can happen with out partnerships. LG was the first to take the stage, then Skype was next. Skype tells us that we’ll have deep integration into all LTE phones with front and rear facing cameras for mobile video calling. The HTC ThunderBolt, which we covered a short time ago, will be the first LTE offering from HTC. Featuring a 1 GHz processor, Skype video chat integration into HTC Sense, 8 gigs of internal memory, a 4.3-inch screen and Android 2.2

Electronic Arts promises some great gaming experiences over LTE, though we’re not quite certain what the benefit is to having a higher speed network, other than perhaps in a multiplayer environment.

Motorola will continue to be in the Verizon lineup, as well. With the DROID Bionic and Motorola Xoom tablet, we’re highly impressed.

Of course, it’s worth bearing in mind that you’re still under a 5 gigabyte cap each month, and going over that will cost you a fair amount of cash. With that cap in place, we’re still somewhat disappointed by Verizon’s LTE offering, but the unlimited 4G from Sprint might still push the company toward a more generous offering.