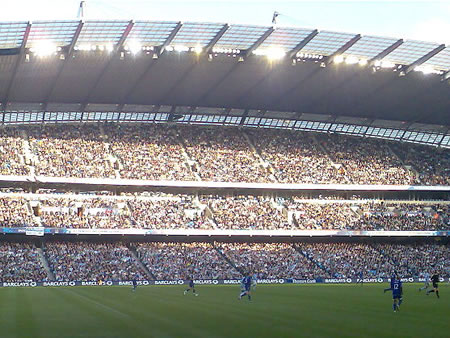 Manchester City has announced that it is to encourage its fans to help build the official iPhone app for the football club, soliciting suggestions for features that should be included in future updates to the application when it is released in the new year.

The football club is working with London-based agency Aqueduct to develop the application, an app that will feature stats, scores, commentary and videos, updating fans regardless of their location.

Manchester City has a complete social media presence, setting up a dedicated Tumblr blog to detail developments to the app. The blog uses DISQUS to give commenters the ability to give their opinions on the latest updates, most of which are bemoaning the fact there isn’t an app for Android or Windows Phone devices currently in development.

We recently reported on Manchester City’s social experiment where the club held an open training session, trialling a live video stream of the event on Facebook. The stream featured a preview of the club’s new kit, the new family stand at the City of Manchester Stadium and was the first chance to see the club’s new lineup in action.

The stream and the crowdsourced app demonstrates Manchester City’s commitment to interacting with its fans and keeping a sense of community about the club.

“When designing the app we knew it not only needed to look slick and be extremely useful, but most importantly fun to use, be it down the pub with friends or in the stands with your family.

The app is only the beginning and will constantly evolve and get better with time, that’s why we created a blog for fans to leave their feedback and ideas.”