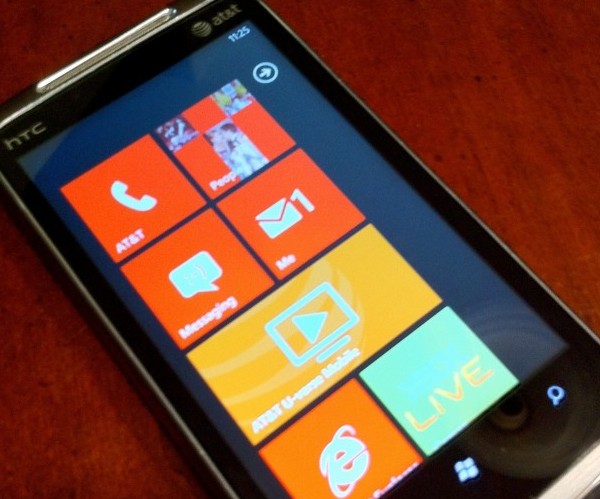 Windows Phone 7 devices, announced March 15, had some proclaiming it an “iPhone Killer.”  Once Windows Phone 7 made its way to the hands of reviewers the reviews were mixed.

AT&T was kind enough to send an HTC Surround to us to review and outside of Tweeting about my initial thoughts, I’ve said very little about the device, until now.

The HTC Surround arrives with the following specs:

With the basics covered, let’s dive into the device, the guts, the hardware, and the OS, to see if Microsoft has a smartphone hit on their hands. Make no mistake, Windows Phone 7 is the most exciting aspect of this, and all other devices running the OS. The OS is wonderfully designed, intricate, and the more I interacted with it, the more I enjoyed it and wish I could use it more often.  Nothing about the OS feels restrictive.  Everything feels free and flows with a pleasing elegance.

On all Windows phones, including the Surround, there are three navigation controls, back, Start and search. Other features of the hardware include a microUSB port, a 3.5mm headphone jack a power button, with sturdy volume toggle and camera shutter button on the right-side of the device.

The device itself feels well-constructed.  The HTC Surround feels substantial without feeling heavy.  That said, at 5.8-ounces, the device is slightly on the heavy side.

Two items worth noting concerning the Surround is that it lacks a front-facing camera (odd given its primary focus is media) and the device also lacks an expandable memory card slot. Lack of an expandable memory card slot is strange given other HTC models can accommodate additional microSD memory to give their devices a competitive advantage over the likes of the iPhone, which lacks the feature. The differentiating features of the HTC Surround are a slide-up speaker and kickstand. Nice, but the device lacks a screen both large and crisp enough to make the Surround a true media powerhouse.  Don’t get me wrong, the Surround has a nice screen, bright and sharp, but without a top-notch screen, the addition of a slide-up speaker not only adds weight to the Surround, but also makes the device thicker.  Therefore, the speaker, while a novel concept, is nothing more than a gimmick given the negatives of the feature outweigh the positives.

With respect to playing music on the device, anyone familiar with Microsoft’s Zune will feel right at home.  A few odd aspects conerning music playback present themselves, notably multiple screens available for each track and no built-in music sound settings. To solve the latter issue, download the free HTC Sound Enhancer app, allowing one to add bass, or employ a preset EQ setting.

Super Look at Sound and Video

Slide-up the screen, expose the speaker, pop out the kickstand, and one’s ready to determine the media capabilities of the HTC Surround.  Unfortunately, sliding up the screen doesn’t offer mind-blowing sound quality.   In fact, other devices I’ve used with lower aural pretensions on both speakerphone or video playback modes, offer similar, if not better, sound than that of the Surround.  Below is an example of the speaker, kickstand and media playback in action.  Nice, but nothing out of this world.

Is the Surround Functional?

When trying out a new device I call my Grandmother.  She’s hard of hearing making her a perfect subject to test a phone’s call quality.  Of all of the devices I’ve tested, the Surround gets the call quality and clarity stamp of approval from my Grandma.  Regardless of how a call was made, hands-free, speakerphone, or holding it up to my ear, all I contacted were impressed with the Surround’s call quality.  Well done Microsoft and AT&T. Concerned about one’s contacts?  No worries.  Windows Phone 7 devices, including the Surround can merge as many phonebooks as one needs (Google, Facebook, SIM, Outlook, etc.), bringing the advantages and communications options of all into the single People contact list.

The remainder of the Surround’s functionality concerns the OS.  The interface is intuitive and enjoyable to navigate. The first reason behind these advancements center on large, almost contiguous, icons, making finding them easier than those on other devices.   Second, the apps on the primary home screen and the secondary screen are listed in a single, alphabetical, line.

Navigating from one app or page to another requires two taps for the majority of functions.  Apps for  the phone, messaging, e-mail and the app marketplace clearly indicate the number of messages or updates awaiting your attention, again, a nice feature.

The Surround uses Explorer as its browser.  As an iPhone 4 user I found Safari to have a slight speed advantage over Explorer in basic tests.  The difference wasn’t terribly noticeable, something noticed by others conducting similar tests.

Unfortunately, the debate over  which device has the faster browser cannot be settled, but what we do know is that Windows Phone 7, like the iPhone 4, does not support Flash, and when browsing on the Surround, occasionally text on Web pages can be distractingly jagged.

The Surround’s camera is terrible.

One nice feature concerning the camera centers on not requiring a camera icon on the home screen.  Want to take a picture?  Simply press and hold the camera shutter key, activating the camera from any app or condition, including sleep.

The negatives concerning the camera far outweigh the positives.   A list of the negatives:  the OS does not remember adjusted camera settings, resolution defaults are 5 megapixels for still photos, VGA for video, and should one choose a lower resolution for stills or the higher HD resolution for video for a photo session, the Surround reverts to the defaults after leaving the camera feature.  It’s as annoying as it sounds.

Moreover, the image and video quality is substandard.  Still images and videos are fuzzy, detail is limited, and HD footage clocks in at 15 frames per second, instead of a full 30 fps.  The only quality, and not by much, shots the Surround captured were indoor using flash.  Another issue?   If you want to hear dialogue while capturing video, only the included headphones will allow you to do so.  Use any other headphones and you’ll experience nothing but silence.

Not much to say here.  HTC claims 4.17 hours of talk time for the Surround.  I found battery life on the Surround quite nice.  A mid-day charge, typical on similar smartphones, was not needed.  Well done HTC.

The HTC Surround’s bulk, horrid camera and several unneccessary features standing on their own would make the device no one should consider purchasing if it weren’t for the wonderful Windows Phone 7 OS, strong battery life, and solid build of the phone.

I encourage you to try the phone for yourself, and if you’re looking for a Windows Phone 7 device from AT&T, don’t forget they are buy one get one free this weekend.