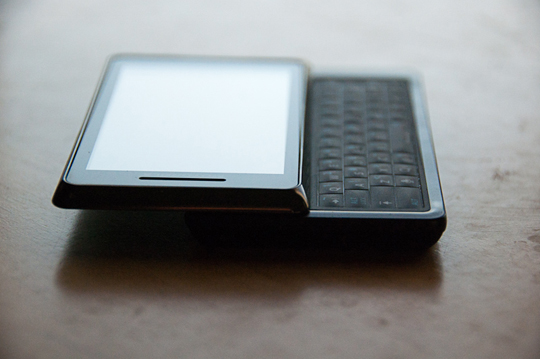 Let’s make one thing perfectly clear – if you love the original Motorola Droid, then you’re likely to love the Droid 2 as well. However, if you’re not familiar with either of them, then read on my friends, because the Droid 2 is a great device…with a skeleton in its closet. The Droid 2 is, at first blush, simply a logical upgrade to the original Droid. The few complaints about the Droid were addressed and fixed in the Droid 2, making it arguably one of the best phones in Verizon’s lineup. The most noticable thing is that the Droid 2 has done away with the D-pad in favor of 4 arrow keys. This allowed the entire keyboard to be widened in the same amount of space, making the keyboard not only usable but also boosting it into the “best of the best” category for slide-out QWERTY.

Other changes that you’ll notice are a gunmetal top frame, with a slightly blue lower frame. Moto has also ditched the gaudy gold accents from the Droid in favor of black and silver. Even the speaker grille on the back of the device is a sleek silver version for the 2. Overall feeling of the Droid 2 is a bit more sleek than the edgy, industrial feel of the Droid.

The screen remains the same, which is fine considering that the Droid had a great screen The changes however come in speed. You’ll now find a 1ghz OMAP processor with 512 MB of RAM as opposed to the 5/600 (depending on whether you got the speed bump in 2.2). The camera stays the same, and I can’t tell a noticeable difference in the image sensor. Pictures still look great in the day, but are less-than-great in any sort of lower-light condition. Software on the 2 is Android 2.2 with a light version of Motoblur. It’s…honestly not very intrusive as far as UI enhancements go. I do also appreciate the expanded options in the Settings screen of the 2. You now have access to a Data Manager and Battery Manager function that will help you to customize battery life to your using. Overall, pretty handy stuff that I wish I had on my Droid 1.

What is surprising, though, is that the Droid 2 doesn’t feel as snappy as you might expect. In my review of the Droid X, I was pleasantly surprised to see how fast the phone ran, even using Android 2.1, with the 1 GHz processor. I expected the same out of the Droid 2 and was somewhat disappointed. The phone never lagged, but it just felt a bit “mushy” when switching between screen or loading the apps tray.

Here’s the part where I have to get a bit “if this, then that” in the review.

If you have never used an original Droid, you’ll love the Droid 2. If you have, it’s possible that you’ll love it, but it’s also possible to be disappointed. With the near-doubling of CPU and RAM, you’d expect a much snappier phone than what I found. So, that is to say that it’s still a solid buy for many Android lovers.

Then there’s the other skeleton…

There is a nasty rumor floating around that the Droid 2 will go out of print soon, in favor of the Droid 2 world edition. We don’t have specifications yet for the World Edition 2, but you can bet that it’s nearly the same phone. It might eschew a camera, in order to have more room inside for the additional radio functions necessary to make it a world traveler, but otherwise it should be the same.

The problem, of course, is that we haven’t yet been able to get confirmation about the World Edition, so it’s all speculation at the moment. But if I bought a Droid 2 today, and 3 months later it went away, I’d be pretty miffed.

Right now, today, knowing the facts that we know, the Droid 2 is a very solid buy. Even with the slightly mushy feel to the screen and input, it’s still a great phone. However, I have to say that I’d still take a Droid X over the 2, at this point. The X is Verizon’s best phone of the moment and I can’t see favoring the 2 over the X especially since Verizon will be rolling out 2.2 to the X starting later today.

It’s really a question of gambling, and I’m not comfortable with that. I love the 2, and think it could be a very solid phone, but I would still hold my cards close until I new more about the rumored World Edition.

Read next: Search and you will receive. Microsoft launches Bing Rewards.