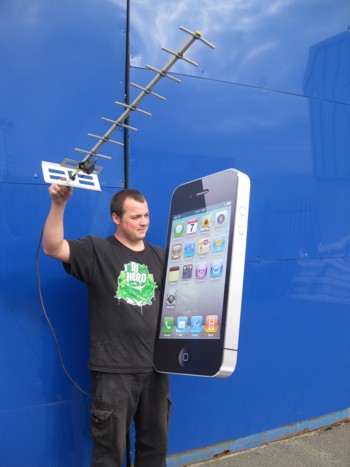 Over the past couple of weeks, I’ve had the pleasure of playing with some really great Android devices from both Verizon and Sprint. Before that, our own @jffcrmr had his own turn with a Samsung Galaxy S phone on AT&T’s network. In having nearly identical phones, side by side, we’ve been given a unique opportunity to really look in depth at the US mobile carriers and to see what’s going on.

Of course, any time that you talk about mobile carriers in the US, you’re going to raise some eyebrows. People are fiercely dedicated or staunchly uncaring about who they pay their monthly bill to. In the US, often times, it becomes a “lesser of two evils” decision that nobody wants to make but everybody seems required to do.

You’ll notice, of course, that I didn’t include T-Mobile into this article. The reason being? Despite my own numerous attempts to review T-Mobile devices, nobody from the company has so much as lifted a finger to get in touch with us. So there’s your shot, T-Mo. You can reach our Mobile editor, Matt, by emailing [email protected].

While this doesn’t involve the phones themselves, it also does in a roundabout way. In order to talk about the networks, you have to talk about the devices that run on them. However, for the most part, this is a few minutes that we’ll spend talking about the state of wireless in the US. Verizon loves to talk about its network, and truth be told, it is widely recognized as the largest-spreading 3G network in the United States. There is simply no denying that. The problem, however, is exactly that. It is the widest-spread 3G network and 3G CDMA is a dying breed of limited bandwidth both here and in the rest of the world.

At present, there are only rumors and a couple of choice pieces of information about Verizon rolling out an LTE/4G network, and we can’t seem to pry much information out of them. Does Verizon need an immediate rollout of LTE in order to survive? No. But in order to set the pace for the rest of the carriers in the US, it absolutely has to do something and it has to be done quickly. Facing facts, if AT&T didn’t play home to the iPhone, the carrier would likely be struggling to stay in business. Stories of their absymal service and poor customer care abound. However, let’s bear in mind that old blue is still one of only two GSM carriers in the US and as such holds a fair amount of power to sway the industry moving forward.

With Windows Phone 7 just around the corner, and initially only rolling out to GSM providers, that leaves only T-Mobile as a carrier choice in the US. It will be interesting to see how much muscle Apple will flex in order to keep a Microsoft-branded product off of the network with the iPhone, but AT&T itself doesn’t have a lot of bargaining power in this particular case.

I have to admit to being more than pleasantly surprised by Sprint – I was actually floored. When their communications people reached out to TNW and offered to let us take a look at their new 4G Galaxy S phone, that was great. When it hit my doorstep and I was told that I should enable 4G on the phone as it was being tested in my backyard, I was blown away.

Here’s the fact – at present, Sprint is the only 4G carrier in the US. Sure, Verizon plans on LTE (which is a different animal than 4G, mind you), but so far all we have are rumored date “ranges” of fall 2010…and not a word about devices yet.

Then let’s talk price. Data on Sprint’s 4G phones will run a $10/month premium, on top of your monthly data plan, but even with that it’s still cheaper than anything Verizon or AT&T has managed to do. Sprint’s unlimited (as long as you’re calling mobile devices) talk, text and data plan will run you $70/month, with an additional $10/month for a 4G device. The only cap? 5GB/month of transfer over 3G.

Oh yes, and then there’s the fact that 4G data is truly unlimited. Yes, I mean you can download terabytes of information style unlimited. I’m told that the speed test results that I experienced from my house are on the high end of the spectrum, as I easily pushed past 6mbit/sec. on almost every test. However, even if you’re only getting the low end average of 3mbit/sec., it’s still a game-changing experience on a mobile device.

The question of who wins still comes down, primarily, to what you want. If you want an iPhone in the United States, then AT&T is your only (non-jailbroken) choice. If you want an Android device, you can shop any carrier. If you want 4G, then Sprint is the clear winner. If you’re holding out for Windows Phone 7…then you probably shouldn’t have bothered reading this.

Now, before I get called a Sprint fanboy, mind you that I’m a happy Verizon customer, with a Motorola Droid that I love. But even I can see the forest through the trees. Verizon has a rough road ahead of it when it comes to LTE, and big red continues to make really poor choices regarding the software on its Android phones.

So there’s the wrap-up. If you want the current best service in the US, you need to see if Sprint 4G is available in your area. If it is, you will not be disappointed. If you want the best 3G coverage, then Verizon is still your hands-down winner…but the market is shifting faster than VZW wants to move.

Read next: What Ever Happened to Amazon in the Middle East?