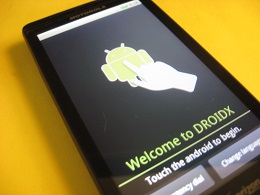 A few months ago when Motorola brought the original DROID to market, it quickly became the best selling Android device. As a follow-up, Motorola has done a couple of phones that are both selling via Verizon as their top tier Android devices.

The DROID X, which we will look at today, ships with the following specs:

Beyond the numbers, though, is what really matters. While the original DROID is still a fantastic device, it’s starting to show its age because of an underclocked processor. The display is still beautiful, the phone is still one of the best we’ve ever used, but as applications get better, it is becoming dated. The first thing that you’ll notice when you pick up the DROID X, of course, is the size. It’s more akin in size to a personal media player than to a phone. The 4.3 inch screen is, in a word, beautiful, but the bottom hard buttons (replacing soft keys in the original DROID) are difficult to use with a single hand.

Speaking of the soft keys, it’s worthy to note as well that they are in different positions than on the original DROID. While it eventually will make more sense, if you’re used to the old placement it will be force-of-habit confusing for a bit.

My sole complaint about the DROID X, physically, is that it simply doesn’t feel as solid as the original DROID. The first DROID felt like a tank. It had a solid, metallic feel to it and I can say from nearly a year of use that it has held up exceptionally well even without ever having been in a case.

The X, while still solid, just lacks…something. I can’t put my finger onto it, but it simply doesn’t feel as well built as the OG DROID. In all fairness, however, holding the DROID X next to the new Samsung Galaxy S phones, the DROID X is a hands-down winner. It doesn’t feel plasticy at all and has a solid heft to it by comparison to other manufacturers.

Android 2.1 is the shipping OS for the DROID X, though we’re hearing that 2.2 should be coming over the air to the device soon. While I certainly missed some of the features of 2.2, the 1 GHz processor is so perfectly-tuned to the phone that I didn’t notice any speed issues. Even running graphics-heavy applications, the DROID X shined. Once 2.2 lands on the X, things will clearly only be better.

As far as software on the X, there is a refined version of Motoblur, which is Motorola’s overlay of the vanilla Android OS. However, instead of being so invasive as in past Moto models, Blur on the X only changes a couple of things on the screen, leaving most of the vanilla feel intact.

You have 7 screens on the X, with quick-touch sections on the bottom of the screen to take you to each one. While I find 7 to be a huge amount of overkill for me personally, it will no doubt be a welcome addition for some users.

The built-in Moto widgets are…somewhat useful. While I didn’t put them to use myself, you’ll find toggles, calendars, quick contact tasks, messages, slideshow and social networking widgets, among a few others. The interesting part about them is that most of them can be re-sized, which is a welcome addition to the typical Android widgets in a non-rooted ROM.

I did put the mobile hotspot to good use, and had great results. Speeds were hovering around typical 3G expectations, and we had no issues connecting 3 devices to the X. If you’re a road warrior, the added charge for the 3G hotspot is just going to be par for your course. It’s well worth the cash to not have to carry another device.

Camera quality on the DROID X is lovely. While the original DROID had a decent camera, the X surpasses it hugely, in any indoor/low-light condition. A side-by-side comparison of shots from the two devices show a much richer color scheme in the X, and the on-screen controls for the X are vast improvements over the original DROID as well.

720p video from the X is satisfactory. Whie it won’t replace your dedicated video camera, it’s a great stand-in for those “oh crap, I forgot the camera” situations:

Call quality on the X is good, though not spectacular. From day one with my original DROID, I was impressed not only by the reception but also by the sound both incoming and outgoing. The X, it seems, suffers a tradeoff to sound quality but gives you that lovely screen instead. Speaking of reception, I took both the OG and the X with me on a road trip. Generally speaking, reception stayed identical between both devices. However, the X would hold onto a weak 3G signal longer than the original DROID, providing a bit more time before dropping to an analog or roaming area.

My other huge love, for the original DROID, was the external speaker and the sound of the internal earpiece. Both of them, simply, are some of the best sound I’ve ever heard from a phone. The X, as I said before, seems to have negated some of the quality that the original had. Maybe it’s not a huge deal for you, but it’s worth noting.

This question comes down to a couple of things. First off, the X is a lovely phone. But you have to bear in mind that it also has some competition. When it came out in early summer, it was unbeatable. Now, however, there is the DROID 2.

On a 2 year contract, the X and the 2 are the same price. They’re nearly the same specs, save for the screen size, and the 2 ships with Android 2.2 FroYo.

Sticking the Droid X in your pocket is reasonably comfortable, but still, it is very big. So what it comes down to is a matter of how badly you want that screen. In order to get it, you’re going to sacrifice a touch of sound quality, and it’s going to be harder to use 1-handed than the DROID 2. Does that matter to you? It’s a question that only you can answer.

Overall, the X is a fantastic device, and I have no qualms with recommending it fully. We’ll be reviewing the DROID 2 soon, and we’ll let you know how it stacks up, but for now the X is my top choice from Verizon’s smartphone lineup, hands down.

As an aside, a huge note of thanks to Tiffany and Robin from JDPR for providing TNW with our review devices.

Read next: 360 Panorama for iPhone updated, keeping your head (and iPhone) spinning.