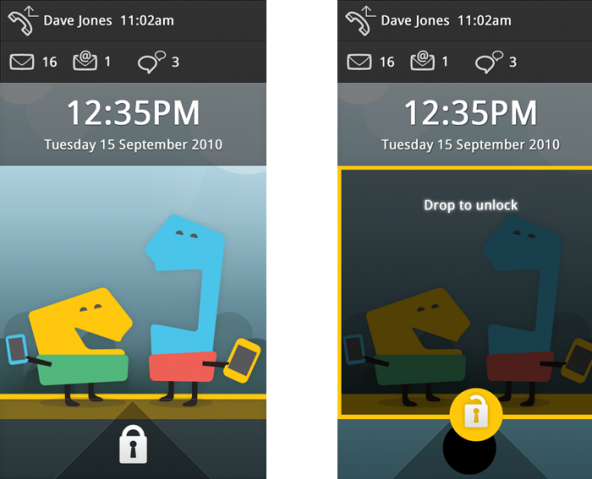 We have been keeping up with the progress of Nokia’s and Intel’s collabortaive mobile operating system, bringing you screenshots of its first stable release to developers.

Over the weekend, new shots emerged of the MeeGo UI, showing us that the OS is continuing to be highly customizable, giving the user the option to completely change the way the UI looks and feels. MyNokiaBlog grabbed the screenshots, pointing out how the the 1.1 release of MeeGo has integrated a interactive lock screen, giving owners to check out any missed calls, text messages, emails.

The lock screen has two unlock mechanisms, one you have to drag the lock icon at the bottom into a designated square, the other you can drag it from the top downwards. Multitasking has a cover-flow/carousel feel to it, allowing the user to scroll open application windows. Again, MeeGo is designed to allow users to specify different views and settings, giving users the option to choose a grid option which shows four open windows at a time: MeeGo’s app menu is pretty standard but instead incorporates a 3×4 grid and a bottom launcher bar. Like iOS, users can scroll to different pages of apps but with MeeGo, the user can customize the experience by changing icon size, font, sound, haptics and feedback graphics to include a 4×5 grid if they wished:

By incorporating elements from both Nokia’s Maemo platform and Intel’s Moblin operating system, MeeGo will hopefully appeal to legacy users of Nokia handsets by offering new and innovative smartphone features and the ability to customise the mobile experience.

From what we can see here, MeeGo’s UI is slick and visually appealing, we just hope it hardware specifications can match those of HTC, Apple and Motorola.