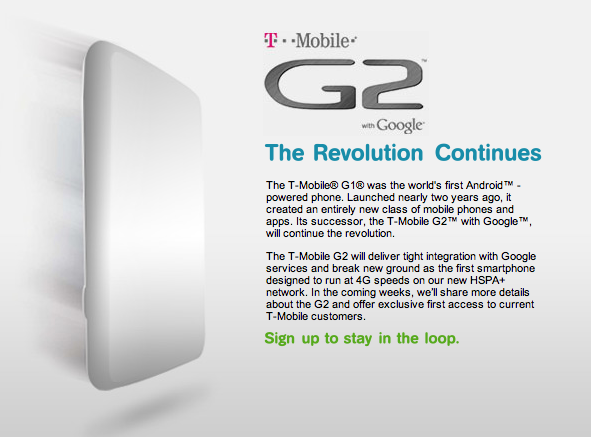 Some of you might remember the world’s first Android-powered smartphone, the T-Mobile G1, I certainly did because my wife bought it on the day it launched in the UK.

Since then Android has gained some serious momentum and is well on its way to challenging traditional market leaders to become the number one mobile operating system. There are reports suggesting that there will be 55 million Android handsets shipped this year.

T-Mobile has been readying its HSPA+ network and has now put live the mini-site for its first HSPA+ enabled smartphone, the T-Mobile G2, the natural successor to the G1. Again it will be Android-powered (although we don’t know what firmware will come installed) and feature Google branding.

Some might already own a G2 Touch handset (HTC Hero), we imagine this will be an entirely new handset from the mobile carrier.

As T-Mobile puts it:

T-Mobile is proud to have launched the world’s first Android-powered phone, the T-Mobile G1, which captured the imagination of developers and consumers alike nearly two years ago. Now, we are readying its successor – the T-Mobile G2 with Google.

Delivering tight integration with Google services, the G2 will break new ground as the first smartphone specifically designed for our advanced HSPA+ network, which delivers today’s available 4G speeds. In the coming weeks we’ll share more details about the G2, including information on how current T-Mobile customers can get exclusive first access. Visit http://g2.t-mobile.com to register for updates.

And now we wait for handset details, prices and plans.

Read next: School Avoids Criminal Charges For Using Laptops To Spy On Students