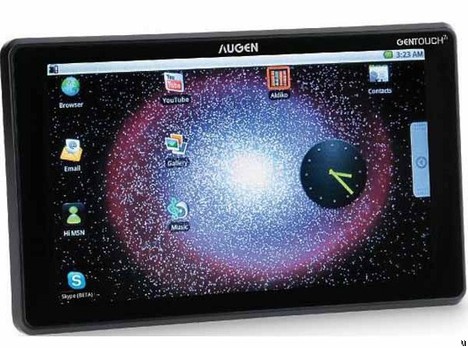 As we reported yesterday, Google had told Laptop Magazine that Google’s suite of proprietary Android apps, such as the Android Market and Google Maps, that were on the Augen GenTouch78 tablet on sale at Kmart, were unlicensed. Well, Augen has put out a statement admitting to “unintentionally” forgetting to remove the apps after it installed them for testing purposes.

Apparently, only a limited number of the tablets with the unlicensed software made it to the Kmart shelves and Augen promises that future shipments will not have the proprietary Google software installed unless they get a license from Google (from the statement it looks like Google had a long “constructive conversation” with Augen). Google, to this point, has not licensed any tablet on the market for these apps (the Dell Streak is technically a phone apparently). Here’s part of the statement from Augen:

“On July, 29 2010 Augen had a constructive conversation with Google Inc. The topic of the discussion was Google’s Application Suite. As you know, Google Inc. has released the source code for the entire Android platform under the flexible and commercial-friendly Apache 2.0 open source license. Augen is free to use that open source code; however, the suite of applications comprising Google Mobile Services on Android are proprietary to Google and have not been released under open source licenses. The Google Mobile Service and Android Apps were pre installed during the development process on our tablets for testing purposes, and were not removed unintentionally before releasing the products in the market place.

Google and Augen came to a mutual understanding that the Google Mobile Services Application Suite pre-installed on the GENTOUCH/ GENBOOK Series; could not be removed due to technological constraints for the products that were sold, shipped, or already produced.

For future production runs and deliveries, Augen will block and remove the Google Mobile Services Application Suite from the current devices until further notice. We are currently in communication with Google Inc. to obtain the required licensing for upcoming products, and will announce in our future statements the timelines and availability of these products as it will become available to us. However, for your convenience Augen will add applications to accommodate the absence of the Google Mobile Services Application Suite.”

Read next: FxCamera: Really slick effects for your Android photos