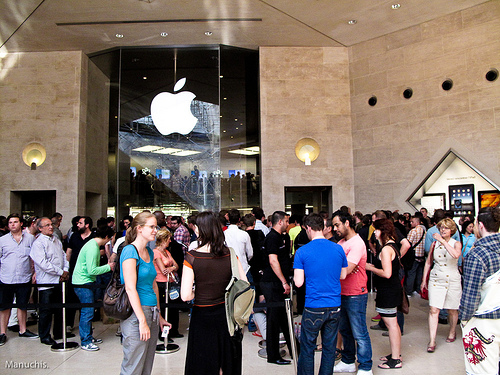 According to Fortune, 77% of iPhone 4 launch day sales in San Francisco, Minneapolis and New York Apple Stores were from existing iPhone owners looking to upgrade to the latest and greatest Apple handset.

Whilst Apple fans were queuing for hours outside of each store, Piper Jaffray’s Gene Munster and his team interviewed 608 iPhone 4 buyers, asking them the same set of questions as they have on the past three iPhone launch days to keep their data consistent.

Munster’s findings were as follows:

Fortune also notes that 6%  of buyers were switching from Research in Motion (RIM) devices, 3% from Android and 2% from Nokia.

Munster predicts that apple will sell upwards of a million iPhones over the next three days, writing:

“While we think Apple will sell between 1.0 million to 1.5 million iPhones in the first three days (including preorders),” he writes, “the actual number is largely irrelevant. Apple is tapping into the global consumer spending sweet spot, mobile, and as a result iPhone numbers are going higher in the coming years.”

Whilst the survey only included 608 participants, we wouldn’t be surprised if the results were representative of most of all the US sales. The full survey results are embedded below.

Do you have the new iPhone? Did you upgrade or is the iPhone 4 your first Apple smartphone? Let us know in the comments.

Read next: HUGE. Project Canvas Gets the Go Ahead.