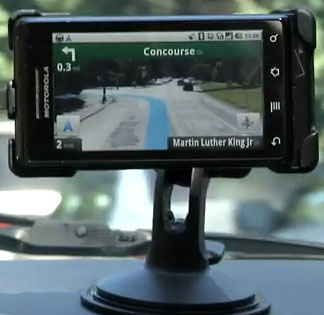 So I got an Android handset this weekend even though I could have walked into AT&T this Thursday (very early of course) and gotten an iPhone 4 as I wasn’t on any kind of contract. What I’m about to say isn’t breaking news, but it is significant to reiterate as iPhone 4’s hit stores this week, because utility and cost savings sometimes outshine style (which the iPhone 4 has a lot of).

In the end, I decided that there are two features of Android make it a much better deal than the iPhone: the ability to turn the phone into a WiFi-hotspot (officially with Android 2.2, but possible through rooting/apps right now), and unlimited use of Google turn-by-turn navigation (i.e. no data limit on AT&T).

Let’s start with unlimited data in turn-by-turn navigation. For the three major US carriers that offer unlimited data usage (guess which one doesn’t anymore), this maybe the best thing Google has ever done for mobile phones. It’s free, it’s based on Google Maps, and most importantly, it works. Yes, Google navigation on the iPhone 4 is coming, but you’ll certainly run over your 2gb limit if you use it often, and who wants to pay extra right? (btw, you could replace turn-by-turn with Pandora, or any other app that you could run all the time in the background of your iPhone 4 and pay through your teeth with that 2gb limit).

No WiFi-hotspot function on iPhone 4 is a deal breaker

The second reason – being able to turn the phone into a WiFi hotspot – was actually the real deal breaker for me with the iPhone, and it’s ironically a deal breaker because of another Apple product: the iPad. I bought the WiFi-only iPad with the exact intent of having a phone that would act as a WiFi-hotspot, therefore saving the extra dollars a month the 3G iPad would have cost me (boy, was that the right decision). I also wanted to be able to connect my laptop, but the iPhone 4 can actually now be tethered (for an extra $20 a month of course).

When I bought the iPad back in April, I had two thoughts on what phone to get: I was going to either get the HTC Evo 4G or the iPhone 4 if Jobs announced the ability in iOS4 (of course we didn’t know either name at that point) for the iPhone to be used as a WiFi hotspot.

Well, I didn’t go with either. With the Evo, the battery isn’t good, and Sprint (ridiculously) charges per month to use the Evo as a WiFi hotspot – so it was out, and as we all know know, there is no way to either tether the iPhone 4 to an iPad or to turn the iPhone 4 into a WiFi hotspot.

Could Apple/AT&T bring WiFi hotspot to the iPhone 4? Absolutely. Will they, at least this year? Absolutely not. So for me, the iPhone 4 might be the best phone in the world, but it doesn’t do the one thing I really want it to and that is why I’m not getting an iPhone 4.

A third reason: AT&T of course – though you can get the Nexus One for AT&T, iPhone is only AT&T, and that’s another dealbreaker.

Notes: As I didn’t want to pay for two data plans, I also never considered the MiFi or Sprint Overdrive. Palm devices also can be turned into WiFi hotspots, but I didn’t even consider buying one of those.

Read next: 2 big reasons to get an Android phone (on another carrier) over the iPhone 4 on AT&T