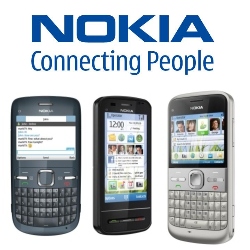 The launch of the Nokia C3, Nokia C6 and Nokia E5 comes as a surprise to many who thought Nokia were preparing to unveil their first Symbian^3 powered handset – the Nokia N8 – but the release stayed true to the messaging theme Nokia had publicised previously.

Each handset features a full QWERTY keyboard and the ability to support up to ten email accounts from all the major email providers. Microsoft Exchange and Lotus notes are also supported with Instant Messaging catered for also.

All devices pull social updates onto either the homescreen or the contacts book of the device, allowing one-touch access to favourite contacts and the ability to update your status or share pictures online.

The devices all have unique features, all detailed below:

The Nokia C3 runs on the Series 40 mobile operating system, the same platform as most Nokia mobile phones but is the first Nokia handset to feature a full QWERTY keyboard. It packs a 2MP camera, WIFI connectivity, FM radio and supports up to 8GB of external storage.

If colours are your thing, it comes in some interesting shades; Slate Grey, Golden White and Hot Pink.

The handset will market at just €90, a price that could encourage younger consumers to buy the device or motivate parents to buy it for them. It should be available to buy in the next couple of months.

The Nokia C6 has a 3.2 inch touchscreen and a full slide-out keyboard and incorporates a 5MP camera aswell as a front-facing camera used for video calling. The C6 is the closest of the three handsets to a smartphone, offering free navigation via Ovi Maps, allows upto 16GB of external storage and comes in black and white varieties.

The C6 will cost €220 and is apparently available this quarter.

The Nokia E5 is aimed at the business consumer and looks pretty similar to a Blackberry. It runs S60 3rd Edition, an older version of the platform that came to be Symbian^1 and according to Nokia offers 29 days (nearly a full month) of standby time. The E5 has a flash enabled 5MP camera and comes in Carbon Black, Chalk White, Sky Blue, Copper Brown and Silver Grey.