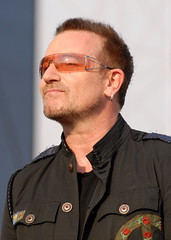 Struggling smartphone manufacturer Palm, has seen a spike in its share price which could be good news for U2’s Bono, who’s ‘Elevation Partners‘ private equity company owns 41% of the business.

Palm, which has just announced that it is for sale, recently launched the Pre and Pixi range in a bid to boost its ailing fortunes in a market dominated by Apple’s iPhone.

With intense competition from other manufacturers as well as Google which has entered the market with its own phone, as well as its Android platform for other manfacturers to adopt, Palm has struggled to keep pace, reports The Telegraph.

Sales for Palm devices have been disappointing despite strong underlying technology.  Now, the company is on the market and has reportedly received early offers from rival manufacturers HTC and Lenovo, which have served to boost the company’s share price which leapt 32% to $5.16 last week.

Bono’s Elevation company originally bought a stake in Palm in 2007 for $325m.  An additional $100m worth of shares were acquired in December 2008.

Read next: You got a project? Try gotProject