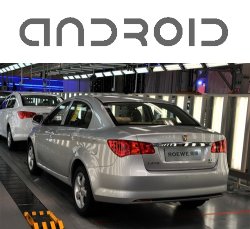 Highlighting the versatility of Android, a new product that started production yesterday which is slightly bigger than most Android powered devices; the Roewe 350, has become the world’s first Android equipped automobile.

The car features a DVD/GPS system that runs on Android 2.1, the latest kernel release from Google. The system will enable drivers to gain access to real-time traffic reports and allows for direct web access from within the car. Being constantly connected, the car also allows the driver to be contacted via online chat, which could be an interesting point for road safety groups.

For those not familiar with the Roewe brand, the company is an amalgamation of the Chinese company SAIC and the old British car manufacturer Rover/MG. According to TwitTown, SAIC bought the Rover 25 and 75 models in 2004, just before MG Rover went into administration, producing the cars in China under both the MG and Roewe names.

It’s not known quite how the car will be connected to internet, whether it will feature an inbuilt 3G card or allow third-party wireless WAN cards.

The Roewe 350 is due to be officially launched at the Beijing Auto Show next month.

Read next: Treegr - A New Approach To Accommodation Classifieds