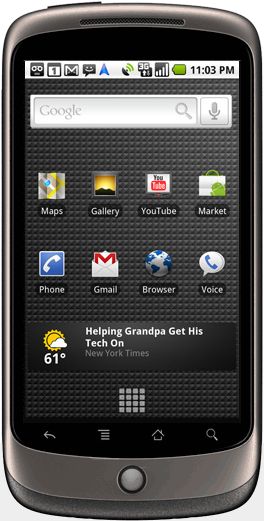 Google fanboys will have to wait at least another month until they can get their hands on a Vodafone subsidized Nexus One after the search giant revealed delays will push its launch date back until the middle of April.

We previously reported on the availability of a dedicated Nexus One webpage on Vodafone UK’s website, allowing customers to register for future Nexus One information. The addition of this page suggested the wireless operator was close to releasing news on their dedicated tariffs and setting a specific launch date for the device.

It’s possible that with the delay in the release of the smartphone, Google could see their launch overshadowed by more powerful and desirable Android handsets. Smartphone vendor HTC worked closely with Google to design and manufacture the Nexus One handset but the Taiwanese company are set to bring two new handsets, the HTC Legend and the HTC Desire to market before the Nexus One is released.

Vodafone are set to launch the HTC Legend next month and whilst it doesn’t pack as much of a punch as the Nexus One, it does run on the Android operating system and is, quite uniquely, created from a single piece of milled aluminium.  The Desire is also set to launch on the Orange and T-Mobile networks next month and is a replica of the Nexus One with the addition of an optical trackpad and Sense UI functionality.

To make matters worse for Google, Apple will be releasing details on how to order their new tablet, the iPad in late April. The iPad, which is also 3G-equipped and features PC-like applications, will be heavily marketed to consumers and could not only steal Google’s limelight at launch, it could prove a more viable alternative to those considering the purchase of a more powerful smartphone.

The Guardian report that Vodafone will offer consumers a free Nexus One when they sign up to a £35 monthly contract.

We fear that not even the offer a free phone will be able to turn the tide in Google’s favour, the only winner could be HTC and possibly Apple come April.