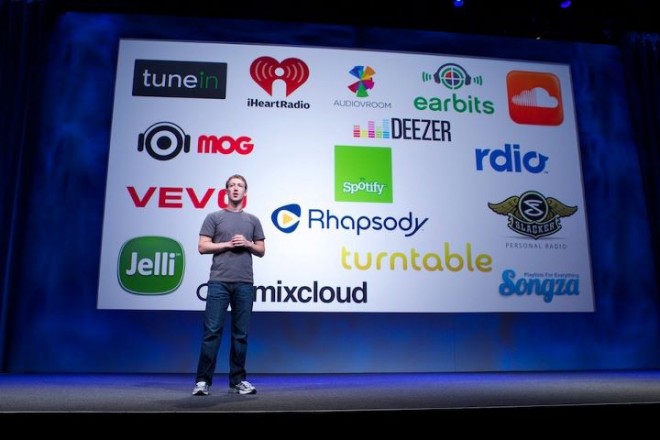 Whether you like the idea of “frictionless sharing” or not, Facebook has made a strong case for the service on stage at the Midem conference. Dan Rose, the VP of Partnerships for the company, says that over 5 billion songs have been shared on Facebook since last year’s f8 conference in September.

The idea with frictionless sharing is that many apps which interface with Facebook will share your activity, without the necessity for you to specifically control what is shared.

Billboard Editorial Director Bill Werde interviewed Rose, asking jokingly whether Rose could prevent people from spamming Farmville. Rose took the opportunity to talk about how Facebook is working to show “the right stories to the right people at the right time”, since frictionless sharing of songs could lead to a page full of nothing but “here’s what your friend listened to”.

Werde then asked about the potential IPO, from a cultural perspective:

“Does the [new group of potential millionaires] distract from the work being done in the company?”

Rose says that having Zuckerberg as the CEO of the company from the beginning has helped Facebook to maintain its focus. “Mark is still a very young guy and he’s going to run the company for a long time. He is really, truly one of the most mission-driven people I’ve ever met in my life.”

So Rose believes in the future of Facebook, as can be expected. Have some thoughts on frictionless sharing? We’d love to know them. Sound off in the comments.

Want to know what else happened at Midem? Our full coverage is here.

Read next: More than half of all UK MPs are now on Twitter