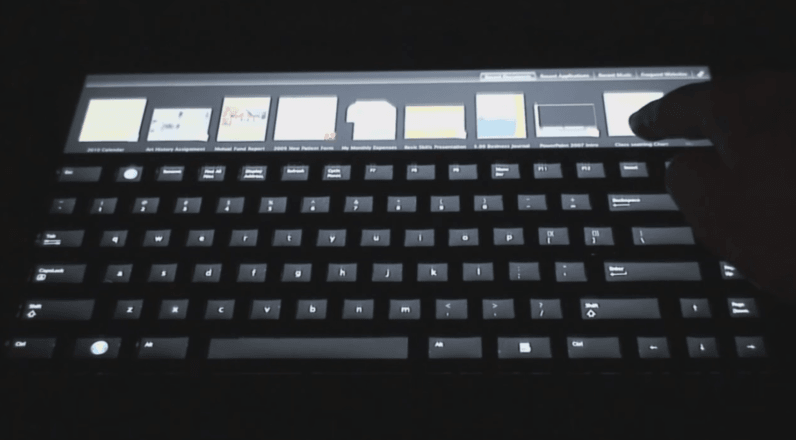 The concept for ‘adaptive hardware’ – as the Microsoft dubbed it – was initially born in 1999 with the intent to build responsive action keys that show and hide parts of the keyboard based on context.

Headed by the company’s director of research Steven Bathiche, the Windows-maker spent years experimenting with keyboard technology that changed the functions keys and actions according to the applications you run.

While the research was primitive in comparison to modern touchscreen interfaces, the Redmond tech giant explored many of the concepts behind Apple’s own MacBook Touch Bar.

Following years of experimenting and prototyping, Microsoft’s foray into adaptive hardware came to a halt in 2009 with a piece of tech it called the “Adaptive Keyboard.” Built as a tactile keyboard with a display underneath, it featured a programmable display top as well as a large touch display area above the keys.

The fundamental difference between the approaches the two companies took was that, unlike the Touch Bar, the Adaptive Keyboard was intended to extend beyond the top of the keyboard, allowing for more meaningful and productive user interactions.

While the Adaptive Keyboard was merely a concept, Microsoft had many features in mind.

The Redmond titan planned to build a functionality that extends the operating system to the keyboard touch area to let you browse through documents and files. Another idea the research team entertained was to eliminate the need for a mouse by enabling shortcuts for “quick reach actions” built straight into the Adaptive Keyboard.

Microsoft ultimately opted not to move forward with developing products based on the adaptive keyboard technology because they didn’t build computers back then. But when they eventually got into putting together computers, they chose to build devices with touch screens instead. Apple took the other path.

Head to this page for more details about Microsoft’s Adaptive Keyboard – or just take a peek at the video below.