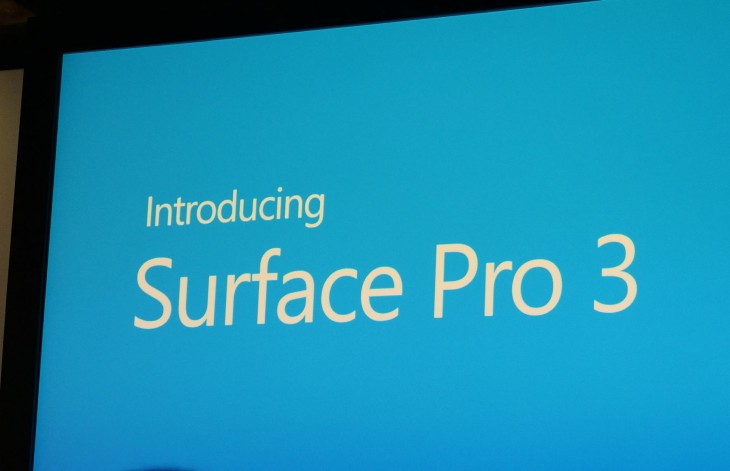 At its “small gathering” event in New York City today, Microsoft announced the Surface Pro 3. The device has a 12-inch screen with a 2160×1440 resolution, a 3:2 aspect ratio, as well as 4K display support.

The Surface Pro 3 starts at $799 and will be available for preorder tomorrow, with shipping beginning on June 20. You’ll still need to shell out $130 if you want the keyboard though, which means you’re looking at $929 for the cheapest laptop option, and another $49 for the pen.

The pen is a big part of the device. When it touches the screen, the device powers on and launches OneNote. You can click the pen to save the content you’ve written directly to OneDrive. Double-clicking it with the camera open will snap a photo and let you write on it via OneNote.

All of this is powered by an Intel Core i3, i5, or i7 processor, depending on which configuration you choose. In fact, Microsoft says this is the thinnest Intel Core product ever made.

“We want to build experiences that bring together all the capabilities of our company,” Microsoft CEO Satya Nadella said on stage prior to the device’s unveiling. “Today is a major milestone on that journey. It starts with dreaming the impossible. Can we design a device that combines the best of a tablet and laptop?”

Clearly Microsoft thinks it has achieved that goal. Or, at least, it is constantly pushing closer and closer towards achieving that goal.

Panos Panay, Corporate Vice President at Microsoft working on Surface, went on for quite a few minutes about how consumers nowadays buy both laptops and tablets. This is a conflict everyone deals with when they enter a store to buy a device. “Today we’re focusing on taking that conflict away,” Panay declared.

Today, the Surface Pro has been reduced by another $100. It’s still quite an expensive device though, especially once you start adding accessories and extras. Yet as we’ll definitely hear from Microsoft time and time again, this is not just a tablet, or just a laptop; it’s both.