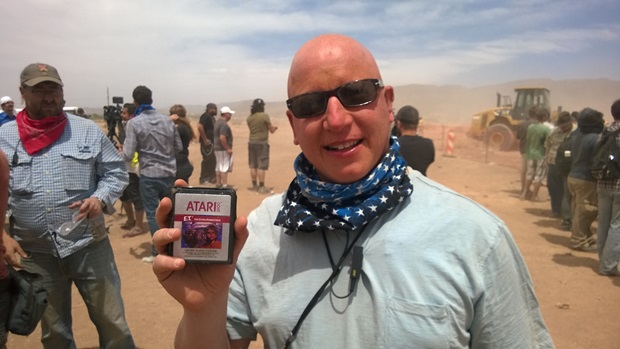 A peculiar operation is underway in Alamogodoro, New Mexico: Microsoft has been digging up a landfill to find copies of Atari’s failed 1982 video game, E.T. to see if the rumored dumping of games there in 1983 really occurred.

The company has finally struck gold and has actually found them too, presumably after weeks of hunting for them. The public were invited to the dig today and shared pictures of the finds, packaging and all, on Twitter, finally confirming the myth.

The dig is part of a documentary funded by Microsoft and looks at the history of Atari, focusing on the company’s struggles in the 1980’s with massive financial losses thanks in part to the E.T. game.

We knew that Atari had dumped large volumes of the failed game in the desert landfill, but it seemed unlikely that Microsoft would strike gold. The New York Times reported in 1983:

“[Atari] has dumped 14 truckloads of discarded game cartridges and other computer equipment at the city landfill in Alamogordo, N.M. Guards kept reporters and spectators away from the area as workers poured concrete over the dumped merchandise. “

Thousands of unsold copies of games and other hardware were known to have been dumped in New Mexico and this find finally confirms what exactly was buried down there. Snopes places the number at approximately 3.5 Million, so there’s a lot more where that came from.

Was it worth it? We’ll have to wait and see how the documentary, which is titled “Atari: Game Over”, turns out. In the meantime, you can actually play the unburied E.T game right in your browser.