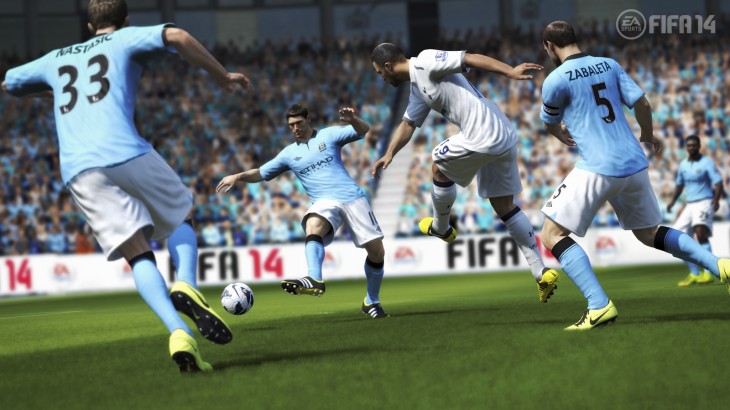 While unveiling the Xbox One in May, Microsoft made a huge mistake with the assumption that it already had the support of enthusiast gamers. By focusing on the system’s TV integration and media partnerships, players felt isolated.

Sony positioned the PlayStation 4 very differently. It was promoted as the definitive console for gamers, designed and crafted from the ground up by prolific developers like Mark Cerny. The idea being that passionate fans drive initial sales and pre-orders; the casual market would follow later on. Gamers responded with mass elation, unsurprisingly.

Fast-forward to Gamescom and much has changed. Microsoft reversed its stance on a number of controversial policies (or the unique features of the Xbox One, depending on your stance). This included the always-on Internet connection, used games and the requirement that Kinect be on at all times. Heck, the Xbox One even comes with a bundled headset now.

At a glance, the PlayStation 4 and Xbox One are now pretty similar. Microsoft has responded to most of the player outcry, but there’s still a feeling that the company is yet to truly win over the hearts of enthusiast gamers. Microsoft’s apology has been accepted, but some players are yet to forgive them.

The biggest hurdle is price. It’s one of the clear differentiators for the two systems. The Xbox One will be sold for $499, or €499/£429 for Europeans, with the new Kinect bundled inside. The PlayStation 4 is considerably cheaper at $399, or €399/£349, but that’s without Sony’s ‘Eye’ peripheral.

Take away Kinect and the price gap between the two systems is negligible. The issue is that most players despise Kinect. The accessory was a critical failure on the Xbox 360, because barely any titles – bar Dance Central and Child of Eden – used it effectively. The accuracy was poor and navigating the Xbox 360 interface with it was a bit of a hassle.

Microsoft is adament that the next Kinect will be an entirely different proposition – it certainly has the specs to match – but gamers are yet to be convinced by it. Aside from Ryse, few games have shown Kinect being implemented in any meaningful way. A growing group are also worried about the possible privacy implications.

There’s been the odd suggestion that Microsoft will eventually give in and make Kinect optional for the Xbox One – but it’s a move that the company will want to avoid at all costs. Like the Wii U, Microsoft is banking on the idea that every Xbox One owner will have Kinect in their home. That scenario encourages game development, because studios can then bank on every gamer being able to actually play their latest title. The company will also be able to make decisions about the Xbox One interface, apps and controls with the knowledge that everyone will have access to the same experience. It avoids unnecessary fragmentation.

But by refusing to drop Kinect, Microsoft needs another way to bridge the perceived price gap with the PlayStation 4. The company revealed its first strategy today at Gamescom: bundles.

While stocks last, any Xbox One console pre-ordered in Europe – including the UK – will include a free copy of FIFA 14. It’s a massive move by Microsoft to try to win the support of the influential ‘middle-tier’ of gamers; those who buy only a handful of releases each year – FIFA, Madden and Call of Duty – but play them pretty extensively.

These players often dictate a console’s overall market share. As online multiplayer grows in popularity, precisely where people are playing becomes a crucial factor when buying a console. After all, who wants to be the only person playing Call of Duty on the Xbox One, if the rest of your friends are teaming up on the PlayStation 4?

By bundling FIFA 14 in with pre-orders, Microsoft is making its claim as the home of football fans. To drive the point home, the company has managed to snag Ultimate Legends – a mode bringing together some of the most iconic players in the sport – as an exclusive for its system.

For the shooter fans, Microsoft also announced today that it had teamed up with Activision to create an additional Xbox One bundle with Call of Duty: Ghosts. It’ll only be available when the game launches in November, but promises ‘special bonus content’ exclusive to the system.

Microsoft knows that it needs to do everything in its power to win back enthusiast gamers. The FIFA 14 pre-order bundle has cut the price gap between the PS4 and Xbox One to just $40 in Europe – but with a free game and Kinect bundled in, it offers considerably more value for sports fans.

It’s down to Microsoft to communicate these new offers and added value to gamers. The company’s messaging has been notoriously bad since the Xbox One unveiling in May, but that needs to change drastically before launch.

A similar pre-order bundle in North America would be wise  – Madden seems an obvious choice – and who knows, perhaps Microsoft will listen to players once more and offer the Xbox One without Kinect.

Today proved that Microsoft has learned from its mistakes. The Xbox One needs to be a video game console, above all else. Offer players experiences that they truly care about, and Microsoft will reap the rewards.

Read next: Todoist for Android gets revamped search, new premium features and a fresh lick of paint