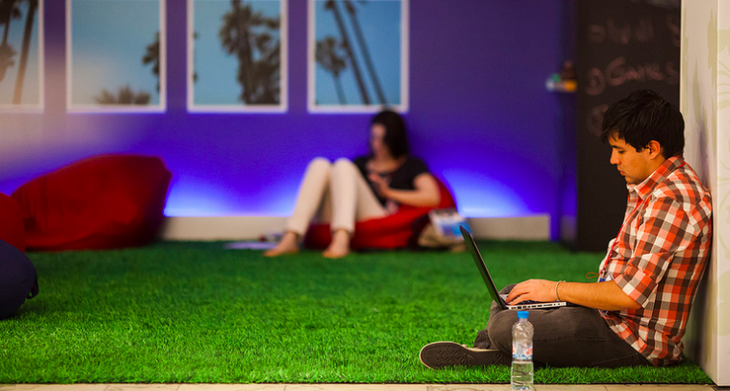 Today at Microsoft’s Imagine Cup finals in St. Petersburg, I caught up with Kurt Steck, current General Manager for Audience & Platform Marketing inside the company’s developer outreach team. He oversees a number of Microsoft programs and events, including Build, TechEd, and Imagine Cup.

Why is Imagine Cup, a competition for students around the world to pit their skills against others in local development rallies for a spot at the global final, in the same tank as outreach efforts aimed at professionals? Because Microsoft wants to foster mindshare, platform, and software familiarity with youths, so that when they do reach professional age, they will carry with them significant knowledge of Microsoft’s larger software stack.

That’s the business side of the equation. Imagine Cup as an entity is a not-cheap program that helps encourage kids the world around – there is a team present from the Palestinian Authority – to get their hands into code and electronics, building what could be the future of technology. It’s oddly inspiring and personally depressing to see such competent kids at work, as the future feels slightly brighter, even as your ego slips as you recall just what you were up to at their age.

In Steck’s view, the Imagine Cup program and other student outreach efforts are for more than simply the sourcing of applications from a different developer pool. Instead, it is to instill “preference” for Microsoft’s tools and the skills needed to act on those preferences. Entrepreneurs will choose Azure over AWS, perhaps, if they are already familiar with it and its use. That chance extends across dozens of potential software and service choices.

There is another side to Imagine Cup that I raised in conversation with Steck: It’s potential linking to the newly formed Microsoft Ventures, and the startup activity that Rahul Sood now heads for Microsoft.

It’s a simple flow to understand: Kids join Imagine Cup, familiarizing themselves with Microsoft’s products. The best teams want to take their projects to the next level, feeding them into BizSpark, Microsoft-run incubators, and perhaps even attracting direct investment from what was once the Bing Fund. It’s an obvious up-chain.

In that view, Imagine Cup is something of a feeder program for Microsoft’s larger efforts to connect with young companies and their leaders. From Steck, to Sood, roughly. According to Steck, Sood and himself are partnering on their audience outreach programs, presumably to ensure that at all points of entry, messaging is consistent.

On the messaging front, how is Microsoft’s cross-platform, shared Windows core story playing out? Steck appears content with progress of the New Gospel among students. 40 projects present, of the larger tally of just more than 80, are cross-platform he pointed out.

That is not to say that the company doesn’t have most of its work still ahead of it. Its Developer and Platform Evangelism team is built to be the voice of the developer community inside of Microsoft in a way, taking the outside conversation and in theory shuttling it into product teams so that they can better make decisions. This makes its outreach efforts at once from, and to, without.

Imagine Cup would be a worthy exercise for Microsoft sans any sort of benefit to itself. Helping students learn, and providing them with challenges to demand higher excellence is a good in and of itself. But Microsoft also garners what it hopes are long-term benefits along the way. All parties walk away content.

Read next: After a lengthy battle, BlackBerry will finally let the Indian government monitor its servers