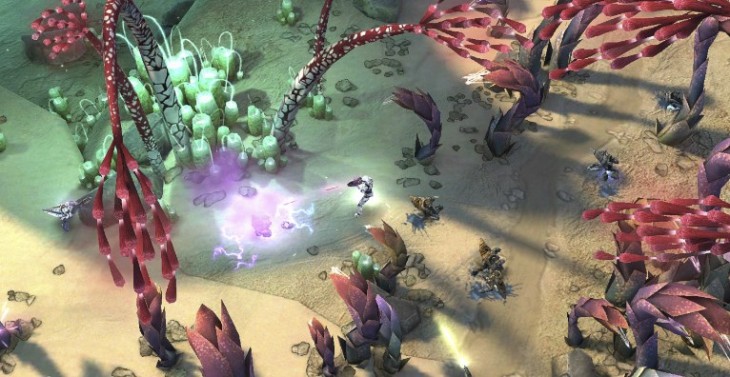 Today Microsoft and 343 Industries announced a coming title for Windows 8 and Windows Phone 8: Halo: Spartan Assault. Building off the massive Halo franchise, the new game due out this July could be the first halo application for platforms running on the shared Windows core.

The title is a third-person shooter, with characters intimate to anyone familiar with the gaming series. Perhaps most importantly, however, the sound effects of the original installments have been maintained. This makes gameplay more familiar, and invigorating; for a parallel, imagine the thrill you receive when you hear a Starcraft 1 Vulture driver tell you to shove it – it’s like that, but a bit more assault rifle-heavy.

The game will retail for $6.99 across all platforms supported, comprised of 25 levels. Gameplay is a training series, on board a UNSC ship designed to recreate classic Spartan battles according to TNW’s Josh Ong. No release date other than the month of July has been released.

Keep this in mind: if you purchase the title for Windows Phone 8, you can’t play the game on your PC; you will need two copies if you want to play on both platforms. Eventually, the Xbox One, Windows Phone, and Windows platforms will be more harmonized. Today isn’t that day, and 2013 frankly isn’t that year.

If you were hoping for tie-ins to Halo 4, be content, as they exist. Players of Spartan Assault can earn achievements and experience that will translate to their Halo 4 gameplay. Microsoft et al promise more and better integration points following launch of the title.

There will be in-app purchases and powerups in case you want to avoid the classic gamer ‘grind.’ Note, however, that this is not a game that you can play head-to-head against your friends. Instead you can compare scores across a leader board, but the classic Halo kill-your-friends style of play isn’t available in the game.

Now, to the screenshots:

Halo on your phone?

Spartan Assault in our testing is a capable game, with dual-joystick-esque controls that are worthy. We’ve tested it on a Surface Pro, but not a Windows Phone 8 device. Once the game lands, we intend to test the bugger across every device we have. For now, however, our experience is a bit limited.

If you have a Windows RT-based device the game will work for you, interestingly.

Given that Spartan Assault will retail for such a low price point, it isn’t much designed as a revenue source for its creators, and most certainly won’t make even a ripple in Microsoft’s earnings. Why then does the title matter? Because it represents the effective first time in which an app that is likely to turn heads across technology is landing on Microsoft’s twin platforms first.

For Windows 8 users, this is a boon. For Windows Phone 8 users, it’s final affirmation that Microsoft loves them, after years of slow app progress. But for Microsoft, what does it garner? Perhaps increased user satisfaction, and modestly increased Windows Phone handset sales among gamers for whom Halo has long been a clarion call.

Spartan Assault won’t be to Windows Phone 8 as Halo: Combat Evolved was to the original Xbox, but it will be a very welcome addition. When the game drops, we’ll bring you the requisite links. Can the title hit the top of the Windows Store and Windows Phone Store at launch? We’ll see.