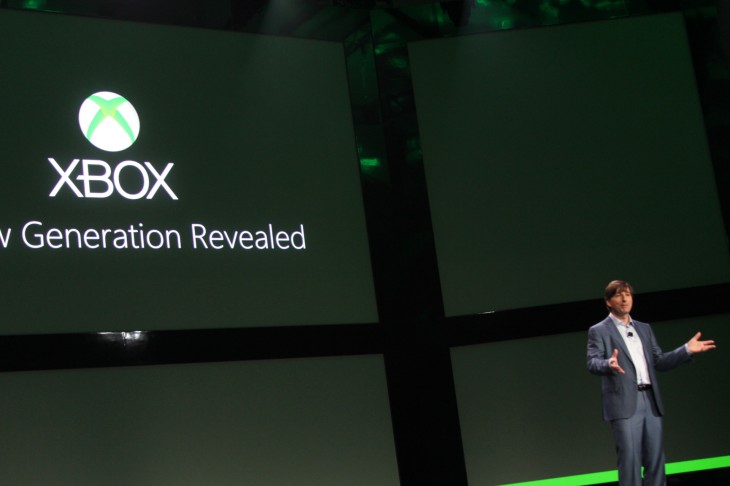 Today at an event at its Redmond headquarters, Microsoft introduced the Xbox One. The new console features an upgraded Kinect sensor and will be launching around the world ‘later this year’.

Microsoft’s don Mattrick took the stage early on to say that the new Xbox “puts you at the center of a new generation of the living room.”

The console announcement was preceded by a video that had Xbox team members, filmmakers and executives touting the new capabilities of the device that would ‘allow you to have a relationship with your TV’. The tech is apparently designed to use sensors to recognize and personalize your experience.

Mattrick then recapped the past decade of Xbox history, including the original Xbox and the and Xbox 360. The motion sensing Kinect also got a shoutout. Mattrick says that E3 will be where Microsoft will share ‘what’s next’ when it comes to software on the new Xbox.

“Can we improve a living room that has become too complex, too fragmented and too slow,” questioned Mattrick. Simple, instant, complete and personalized were keywords used in his intro.

The new Xbox features 8GB of RAM, an 8-core CPU, a 500GB Hard drive, a Blu-ray drive, USB 3.0 connectivity, Gigabit Ethernet and 802.11N Wi-fi with Wi-fi Direct. There is both an HDMI in and out port, allowing for TV passthrough and the new Xbox Guide.

The new Xbox features three operating systems including one which is a sliced down version of Windows 8, allowing coders to use the same Kernel on Windows Phone, Windows 8 and Xbox games. Unfortunately, the Xbox One will not be compatible with Xbox 360 games.

The new Xbox is voice controlled, and responds to the words ‘Xbox on’, with no manual login and or waiting on system updates. There is live TV viewing, and Microsoft demonstrated a way to swap between games, music and live TV as fast as flipping channels.

The Xbox One also has a set of gesture controls that are accessible anywhere on the device. You can grab items like movies and stretch them to fill the screen or shrink them. There is also a ‘snap’ mode that allows you to pop a browser or other sidebar app into the window while you’re watching a movie or playing a game, mirroring features found in Windows 8.

The new Xbox One also has a guide which allows you to see your television programs in a similar manner to a cable box, but with additional features that include trending shows and more. Note that this guide is actually just the Xbox interface painted onto the same thing your cable box is showing you (note the Xfinity in the screenshot below), the One does not have a TV tuner built in or DVR features. Those are still relegated to your cable box for now, meaning that you’re going to be using the passthrough to get a better ‘experience’ only.

There is an IR port on the back of the One that allows you to run a repeater to your cable box to control it.

A new controller is shipping with the Xbox One that includes a redesigned d-pad. You can read more about that here.

EA Sports introduced a new gaming engine called Ignite and four new games that will launch on the Xbox One, including NFL, FIFA and UFC.

Microsoft also showed off some titles like Forza Motorsport 5, which looked pretty impressive, featuring paint flake and plastic texture in what appeared to be in-game footage (but may have been pre-rendered).

Remedy Entertainment also showed off a new franchise called Quantam Break. This is one of 15 new titles that Microsoft Studios will publish in the first year of Xbox One, with 8 of those titles being new franchises.

Microsoft also announced that downloadable content for the next Call of Duty would be exclusive to the Xbox One.

The success of the Xbox has to do with a lot more than gaming — a fact that Sony seemed to completely ignore in its announcements earlier this year. Here’s how I put it then:

Sony’s Andy House flat-out said that “the living room is no longer the center of the PlayStation universe, the gamer is.”

First of all, when was the living room ever the center of the PlayStation universe? A person or person(s) in the living room playing the games were, perhaps. But the metaphorical ‘living room’, a place for people to be entertained, was never tackled properly. The Netflix implementation on the PS3 for instance, was very poor initially, though it has been a big hit for Sony since.

Sony needed to take it further. If it had come out with an announcement that it had partnered with major cable providers, for instance, to allow the PS4 to act as your DVR, automatically collecting your favorite shows to watch there or on your Vita, it would have blown the doors off. Does getting the PS4 the same status as your cable box mean an insanely hard set of deals to pull off? Yes, absolutely. But, if rumors are true, that’s exactly what Apple is attempting to do in at least one permutation of its set-top strategy.

The Xbox team didn’t introduce the 360 as a media portal, but that is exactly what it became. Over the last couple of years, nearly every major video platform and on-demand sports network has made an appearance and the Xbox has become a great option for people looking to play a game, and also to enjoy a movie, TV show or stream music.

Slipping TV features into the next Xbox has further positioned it as the go-to location for your media, and that’s exactly what it was rumored to do leading up to today’s event. Unfortunately, the TV features of the One are much less robust than the early rumors had intimated. No DVR and no cable box replacement in this generation of the console.

This ‘trojan horse’ approach to the living room has served Microsoft well and put it in a unique and powerful position moving into the next era.

The hopes for the next version of the Xbox are no doubt high for Redmond, as the the previous version has met and broken every continuous best-seller record to become the top-selling living room console of its generation. Though the console market ticked down to 42 percent when compared to the same period in 2012, the Xbox still managed to move 130K units last month, putting it on top of the sales charts for an insane 28 months in a row. That’s over two full years of dominance over the PlayStation and Wii consoles, the only other big name contenders.

This next Xbox also has a chance to make strides given that the Wii U has faced poor sales and dwindling support by big name publishers like EA. Nintendo took a gamble with the Wii and it paid off, but the Wii U is getting far less slack. And the PS4 announcement had its own set of quibbles, not the least of which was that Sony didn’t even show the console itself.

Microsoft has nothing but opportunity with this latest iteration, and it seems poised to deliver if early word is correct.

A unified code base for the next Xbox was heavily rumored previous to its release. The combining of the core Windows Phone, Xbox and Windows 8 code would have huge implications for the games market. Developers would be able to build games whose core components (if not interface and mechanics) would work on every major Microsoft hardware platform. This opens up a lot of opportunities to conserve effort and will make the Xbox a more appealing platform to indie developers who have limited resources.

This was one of the main components of the PlayStation 4 announcement that seemed so lacking. Sony seemed unwilling to concede that developers would flock to the platform if they were able to sidestep the expensive development kit scenario and build using a simple, inexpensive hardware SDK. It has since taken some steps to improve this scenario by eliminating the fee for the software development kit for PlayStation mobile, but there is still plenty of gap for Microsoft to wedge the Xbox into to establish it as the dominant platform for independent developers.

If Microsoft seizes the opportunity to mitigate or eliminate costs for developers looking to publish on the Live Arcade and to make it easier to write once and publish everywhere, it would crush the opposition. Add to that the fact that Microsoft also seems ready to unify its payment systems across Windows and Xbox with the elimination of points, and you’ve got yourself a perfect storm of developer appeal.

We’ll be bringing you all of the announcements today, so stay tuned to the Microsoft channel.

Read next: Microsoft introduces new controller for Xbox One console with redesigned d-pad