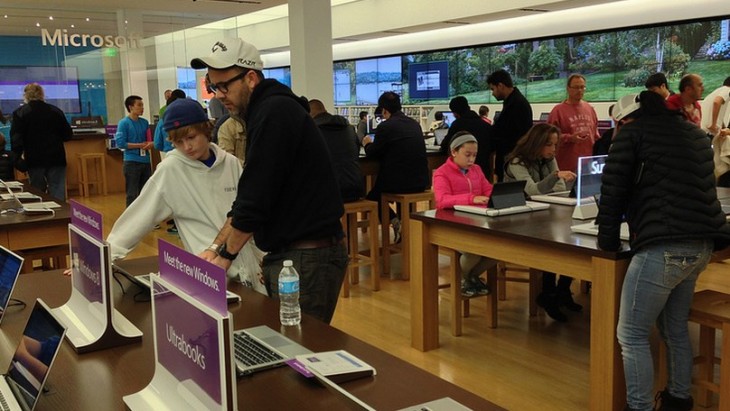 As it is Friday, TNW’s Microsoft review is primed, prepped, and ready for your enjoyment. We’re a bit across the board with topics today, so I’ll scoot us along so that you can still make your lunch date.

As always, ensure that you are following TNW’s Microsoft channel on both Twitter, and Facebook. Let’s get into it.

Yesterday Bloomberg reported that the Surface tablet line has sold but 1.5 million units since launch, of which 400,000 are Pro models, which sport Intel-silicon and a higher price tag.

Speaking loosely, Microsoft has sold 1.5 million Surface tablets in the past 139 days, or more than 10,000 per day. However, the Surface Pro launched just over a month ago, and is selling at a higher clip than its predecessor, the Surface RT.

Averaging its daily sales rate, and adding on the average Surface RT sales rate from its birth, and Microsoft is selling around 20,000 Surfaces per day. However, how long demand for the Pro will remain as high as it has thus far is an open question.

Still, as TNW noted yesterday, those numbers nudge the Surface tablet business into the billion-dollar business club. In its first year. The Surface hasn’t performed as Microsoft had hoped, but neither has Windows 8. Still, the thing has moved enough units that it will stay an active project at the company.

Microsoft moved this week to render Flash content automatically in Internet Explorer 10 on both Windows 8 and RT. You might be surprised that this wasn’t already the case.

However, not all sites will be supported. As TNW reported this week:

The company cited work with Flash-parent Adobe as component to the release, stating that the “version of Flash [it is releasing] is optimized for touch, performance, security, reliability, and battery life.” That said, the company does intend to block Flash on a number of websites that are on its “Compatibility View” list. Those sites “are still incompatible with the Windows experience for touch or that depend on other plug-ins.”

So, mostly Flash is now enabled. But not entirely. Still, if you are browsing on a Surface RT, this will be a welcome change.

Briefly, Microsoft mentioned Windows 9, Internet Explorer 11, and Windows Phone 9. These products are utterly without surprise. In fact, as we wrote before, it would be a larger surprise if Microsoft wasn’t working on the product mix.

Still, it’s nice to see the company chugging on, working on what is coming next. Keep in mind that the Windows 9 mentioned is not the same thing as Windows Blue. Windows Blue is coming out this year. Windows 9 is a whole different cheesecake.

For fun, here is the job posting tidbit in question:

The team will be constantly delivering great products in areas including Windows 9, IE11 services integration, touch friendly devices including iPad and more.

The iPad mention? Come on, that’s hardly a surprise.

Microsoft is working on driving the price of massive touch screen displays down. It even owns the company that is building the best hardware, Perceptive Pixel. TNW spent time in Redmond last week, and fell in love with the displays.

When you expand an operating system, instead of miniaturizing it for a mobile display, the experience is quite different. Windows 8, we learned, is a superior piece of software when it’s splayed across 82 inches of screen.

The displays, known as PPIs for short, are the new ‘must-have’ among Microsoft executives. We too want one.

Read next: 5 reasons why reporters hate your PR pitches