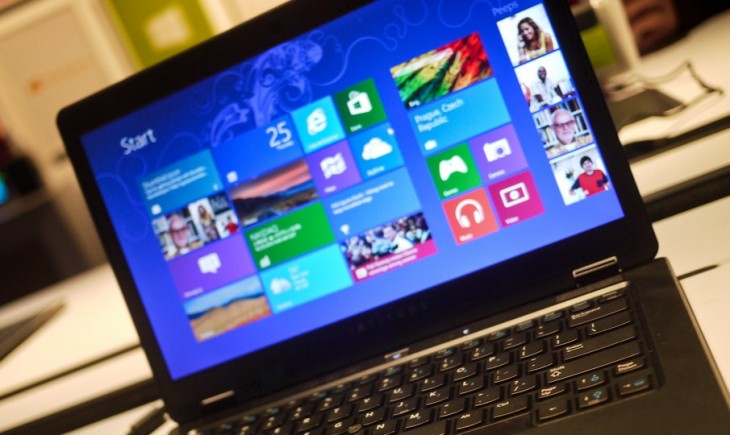 TNW was fortunate to sit with Tami Reller, Microsoft’s Chief Marketing Officer and Chief Financial Officer of Windows to discuss Windows 8’s progress, OEM position, and future last week. This post is divided into short topical segments. Each is self-contained, but will read more coherently if taken in order.

Dispensing with extraneous words as a break with tradition, let’s commence.

Tami was kind enough to provide fresh context on the Windows 8 project, and its down-stream impact. Much has been made of notes reported by third parties that Microsoft isn’t particularly thrilled with the progress of Windows 8 and the Surface thus far. Despite the twin projects’ – not separated at birth, mind you – failure to ignite a revolution in their early days, they have not failed. Through all that TNW has managed to learn through discussion and public information, Windows 8 and the Surface are performing at levels that will allow their key product decisions being kept in place.

Microsoft is not about to make major product reversions, in other words.

The cheap upgrade cycle to Windows 8 is all but over. If you now wish to purchase an upgrade to the operating system you cannot. That is, provided you do not want to revert to overt falsehoods, allowing you to snag a cheap path to Windows 8 Pro. That loophole, however, closes in less than a month. Thus, the days of inexpensive Windows 8 upgrade paths are all but concluded.

Given how long Windows 8 was sold at a heavy discount, Microsoft likely managed to hit key milestones in regard to sales, supplementing the loss on marginal unit revenue of Windows 8 licenses with Surface top line.

Whatever the case, Tami noted to TNW that the number of Windows 8 licences sold, some 60 million at the last update, helped the Windows division at Microsoft to sport 11% increased revenue for its most recent quarter, on a year-over-year basis. More importantly, OEM partner revenue was equal to that of the previous year.

This matters as in that previous year, Microsoft had what might be the most popular version of Windows yet in the market, and no well-advertised product that competed with its partners’ devices. Thus, to have its OEMs match their performance is if not surprising, perhaps heartening to Microsoft fans.

Key to that flat figure is the point that 1,000 devices, roughly, were available at the launch of Windows 8, a number that has now doubled. And Microsoft, in Tami’s eyes, is just “getting started.”

The useful point about quantity and quality is valid.

I’ve written extensively on the need for education as a component of Windows 8’s success in the public technology markets. Help users find their way, and the tools that are built into the operating system might be a simpler, more palatable replacement for what folks knew before, and can either no longer find, or simply lack. Another way: if you make big changes, it’s reasonable to help people find out what they are, and how to work with what is new.

Microsoft explained its view: There are two ways to teach a new product such as Windows 8; you either teach one thing, or you teach everything. For Windows 8, teaching a singularly core function, which opens the door to the new operating system’s function is a possibility.

Microsoft has chosen the ‘teach one main system’ approach, forcing users to make the rest of the progress on their own. This is less uncharitable than it sounds. Microsoft teaches you a core piece of Windows 8 at first launch: how to swipe in from the right side of the screen, granting you access to the operating system’s key levers: the sidebar Charms. From that motion, users are well on their way to understanding how to use the new platform.

Happily for the firm, this method appears to be working at acceptable levels.

50% of machines sold by OEM partners manage the entire ‘open box experience’ in 5 minutes or less, meaning that they are moving from their first power up to using the product in a handful of minutes. Also, in their first two weeks, more than 75% of new users have found the operating system’s Search function.

The company views an experience in which a consumer finds a feature for themselves as opposed to being told about it once as more meaningful. According to its perspective, things found in such a way tend to lead to stronger retention.

Education swings both ways, naturally. To prepare for Windows 8’s launch, the firm completed 200 usability studies, and conducted ‘thousands’ of hours of home trials. In addition, 1.24 billion hours were logged in the various preview builds of the operating systems, spread over 190 countries.

Windows 8 is a radical change to Windows. No one disputes this. However, Microsoft appears confident in its choices, and that consumers are learning the new system at functional rates. Your grandparent’s mileage will vary.

Microsoft sold a total of 20 million Windows 8 licenses between November 27th, and January 8th. That rate tips out to 476,000 per day, on average.

Through cheap upgrades – see Steam’s Windows 8 popularity trends – and normal PC shipments through OEM channels – discounting the Surface as the niche product it remains – and Microsoft is above water. As stated above, the software is not breaking records. Nor, however, does it appear to be suffering from a broad-based market repudiation.

Windows 8 and the Enterprise Market

How Windows 8 fits into the enterprise market is an obvious question. Taking a broad view, Windows 8 fits on top of the Windows 7 upgrade cycles. For firms in the midst of a shift to Windows 7 from earlier versions, Microsoft feels that they should continue. However, via the trend of ‘bring your own device’ (BYOD) at enterprise companies, Microsoft sees a spot for Windows 8, specifically highlighting Intel-based tablets running the new operating system as introduction points.

In Microsoft’s view, the manageability of Windows 8 alongside Windows 7-based firms means that those companies can introduce the new operating system alongside its predecessor with limited disruption, enjoying the better parts of it without incurring fresh headache.

There are high levels of interest, according to Microsoft, among enterprise customers. Certainly, it is pushing on such fronts. The ability to build Windows 8 applications, along its new app structure, will make it attractive in the firm’s eyes. They will build for it, and then perhaps they will adopt it.

By the end of 2013, we’ll see if Microsoft’s public-facing optimism bears out in results.

Unsurprisingly, Tami did not break fresh ground in our discussion. That said, it’s worth examining Microsoft’s position on the device, despite how little it has said publicly or otherwise, as indicative of its larger view on more than its new operating system, but also on how it is delivered to the hands of consumers.

Customer reaction to the Surface RT tablet has been ‘good’ to use its word. Also, it has been ‘helpful’ to get the product into the market, TNW was told.

I take this to mean two things: consumers who have bought a Surface RT device have not deserted the device with endless returns. Also, Microsoft has learned a degree’s worth on being an OEM in the short period of time between the general availability of the Surface line and today.

The first part is concrete, and immediate, while the second is aspirational; what Microsoft has learned will help it in its next product cycle for the Surface project.

Do not expect Surface sales figures. Unless the Surface Pro sells at levels that are unexpectedly high, large enough to prompt the firm to brag publicly of its success, the company is in no mood to release figures on its tablet hybrid’s progress.

You almost can’t blame Microsoft. Whatever figure it can offer will be a fraction of quarterly iPad sales, which will allow media groups to draw a direct, if slightly misguided comparison, and knock the firm’s work; why take the hit when there is no upside?

For now, the Surface project is a question mark, but one that its parent firm appears to remain completely behind.

As a final note on this point, TNW was told that Microsoft’s retail partners wanted to bring the Surface RT into their stores more quickly than what was perhaps initially planned. Microsoft had intended on a period of time to perhaps run the device in its own ‘laboratory’ – its own stores and website – but that didn’t match certain market requests, and so the Surface sales channels were expanded more quickly.

The ‘intrigue’ for the device was high in December, according to the firm.

Microsoft very much wants to tout its OEM partners’ new devices. This should come as no surprise, as the company itself has managed to address but a small part of the larger Windows-based PC and tablet market with its own offerings.

That said, it remains difficult to become excited about most of the devices built to run the new code. There are standouts, of course. The ASUS Zenbook Prime UX31A for example feels great in the hand, and is a generally strong device. That said, the chatter that has been heard that Microsoft wasn’t perfectly pleased with its partners’ efforts is understandable.

Touch, however, remains a key point for Microsoft, and a fair one; Windows 8 is a far superior experience with touch capability. Between the lines, it is plain the company fully expects touch to become the norm as Windows 8 both benefits and demands it.

Intel has made touch capability a required component in its next generation of Ultrabooks. This will benefit the machines – as they will better handle Windows 8 – and Windows 8 – as it will have machines that support it well in the market as the norm.

TNW was given a set of statistics that are worth repeating that explicate the touch point:

On touch-enabled devices, consumers spend 4.5 times as much in the Windows Store, use the Search Charm twice as often, and the ‘Share’ function 2.5 times as often. This indicates more than Windows 8 users benefit from touch, but also that Windows 8 itself benefits, given that its new features see bigger use on such devices, implying a better delivery of the new features on the operating system itself.

Windows 8 is performing much as you suspected that it was. Also, TNW wants to note that folks that we have met at the Windows division have been competent to a person. That’s not something that is said often, but is worth saying out loud at least once.

Microsoft faces a unique set of challenges: OEMs that have been too slow to adapt to market demands, a new operating system that requires user adaptation, and weak market fundamentals that could slow PC demand and thus the roll out of Windows 8. Still, from the short views into the company that we have been afforded, through the rose-tinting of structured meetings, Microsoft appears as confident as ever in its product choices.

Windows 8 isn’t an experiment. It’s a soul change for the company as large as its business model change from software to devices and services.

And when you pair Windows 8 and the Surface you see just that: a device and an operating system designed to deliver services.