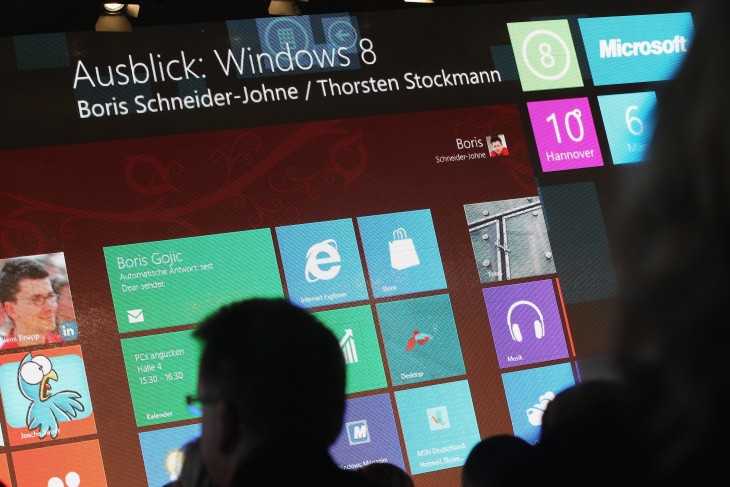 Every day, we’re bombarded with advertising. Billboards. TV. Internet. Flyers. Cereal. Shoes. Advertising comes in every form and flavor, and it’s impossible to get away from.

I wrote on my blog a few weeks back about how it was interesting that nobody was talking about the fact that Windows 8 bakes in ads into Microsoft’s Operating System. Shouldn’t this be a big deal or something? Ten years ago Microsoft was in trouble for bundling Internet Explorer, but now bundling applications laden with advertising is okay? I disagree.

If you haven’t been following, various applications that were bundled with Windows 8 include advertising that cannot be disabled. The weather application has a large space for an advert, as does the Xbox Music application (which doesn’t go away when you subscribe to Xbox Music, either). There’s actually a few apps that include ads, and the common theme is that these applications were produced by Microsoft’s Online Services team (Bing). These applications are:

Across the internet, various writers have agreed and disagreed about advertising after it was brought up. Some were up in arms about it, and disgusted that Microsoft would do such a thing. Others… thought it was ridiculous to even be talking about it. Arguments like “but it’s not in the system interface or core applications” began popping up.

Ed Bott argues that the content in the applications in question far outweighs the amount of applications that don’t show ads, and says that Microsoft has to pay the Online Services team that is responsible for the applications somehow. He also argues that you can remove them, which is true enough for consumers, but Enterprises aren’t going to be able to without Microsoft InTune (not available until 2013, by the way).

Microsoft’s core business isn’t ads. It’s Windows. But that might change very soon, as the software giant realizes that it can’t try and sell the OS at such a high price point any more and moves to try something new. Ed’s right that the system interface doesn’t include ads, and that the money does go to a different department in Microsoft, but it’s not about that. It’s about what this means going forward.

You might argue that this is all supposition, but Microsoft isn’t new to subsidizing their products to get them in the market. Word Starter Edition is a version of Word that is free to users, but supported by advertising and limited in functionality.

Office isn’t the only place where Microsoft’s tried advertising on existing products, too. The Xbox 360 was an early target, and advertising was first (very subtly) introduced by featuring recently released games and content most prominently on consoles. That was the first step. Then, a dashboard update came with static advertising and small animated adverts.

Sure, it might make the product cheaper (or even free), but it’s an inelegant way to try and monetize a platform that users are paying money for. The applications bundled with Windows 8 should be seen as a springboard — inspiration — for users and developers alike to develop their own.

At some point this year Xbox users are going to get 10-15 second “TV-style” adverts before being able to use video streaming applications too. The catch with these ads is that you can’t get rid of them even if you pay the subscription fee for Xbox Live Gold.

The scary thing about these tactics is, they work. It’s hard to believe, but the Xbox 360 is the leading non-PC “viewing” device for ads, in front of the iPad. It’s hard to ignore those numbers, since the Xbox 360 is staggeringly popular. Imagine the numbers Microsoft could attain if they showed ads to a few hundred million Windows users that get the platform for free. It’s a number that’s probably going to be increasingly harder to ignore as their competitors lower their prices and shorten release cycles.

Perhaps, one day Microsoft will release a free version of Windows alongside its paid version (which has less advertising) to maintain their grip on the market and driving new users to the platform. Not only would it lower PC prices, it’d also make it easier for users who have been holding off purchasing an upgrade to jump on the bandwagon. Getting the latest version of an OS in exchange for a few ads being thrown at you seems like a fair deal.

Yes, it’s ridiculous to imagine scenarios like this, but small steps are where it all starts. It might be okay this release to have a few ads here and there in the Bing applications. Then in Windows 9, you’ve got ads in the sidebar of your inbox and messaging. In Windows 10, you browse your folders while watching an ad in the ribbon about the latest floor cleaning product. Okay, extreme example, but you get where we’re going.

Windows 8 is just a step forward; A glimpse into a not-so-far future where the grass might not be so green after all. Or, we’re all wrong (and I hope that’s the case).

Read next: Rock and roll with your friends. How Jolla’s personality won the audience at Slush