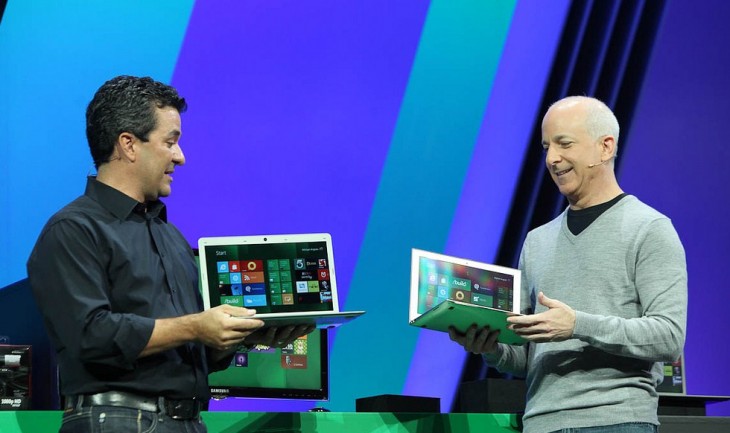 Happy Friday everyone, please note that if you are in the United States and are not currently in pain from overeating yesterday, you have to turn your passport in at the local DMV. Trust me, we know who you slackers are.

On a happier note, we are but a hop, tick, and scotch from the weekend. That means it’s time for our roundup of Microsoft happenings. You, as always, are welcome.

Now, ensure that you are following TNW Microsoft on both Twitter, and Facebook, and let’s get into the news.

Weekly market share data is potentially less accurate than monthly information. Why? A shorter snapshot of the market has a higher chance of being distorted; thus, weekly data is raw, and often slightly off. Pah, we say, to that. Provided that we keep those limitations in mind, why can’t we have our fun?

According to the latest weekly data from NetApplications, Windows 8 proper has crested the 1% barrier, now sucking down a full 1.04% of the computing market. Not bad? It’s a bump from the less than 0.5% that Windows 8 had at the end of October, so the operating system is certainly finding its way into computers. Once we have a new monthly data set, we’ll know more, of course.

Here’s the kicker, however: NetApplications is tracking more than one version of Windows 8. We also have information from the ‘Touch’ and ‘Touch RT’ builds of the operating system:

Those numbers feel soft. The above figures don’t bode well for the Surface, exactly.

For most of the life of the Xbox 360, Microsoft has been hard at work baking entertainment and other media content into the gaming device. No more, it would seem. Instead, the company appears poised to take a fresh direction, ready to introduce what appears to be a set-top box.

From our previous coverage:

[T]he product will be a cost-effective home entertainment device, which will be provided as an alternative to its already popular games console.

Hold the long face, if Microsoft can sell this beast for $100 or less, it could shake up the entire living room situation, and become a boon to cord-cutters everywhere. At the same time, gamers would be granted back a purer experience, and, I would bet, the same strong multimedia power that they have become accustomed to.

In short, if this new device is cheap as dirt, Microsoft could be making a fresh grab for the future of your big screen.

Our favorite Microsoft story from this week involves Windows 7, Steven Sinofsky, Steve Ballmer, and what could be called the ‘long perspective.’ Two quotes tell the tale. We begin with a small excerpt from a report in ExtremeTech:

Ballmer had been frustrated by Sinofsky before. Microsoft partners apparently had a reference design for tablet hardware ready in time for Windows 7. Sources tell us that Sinofsky refused to add support for it in Windows 7.

And, following, a short bit of analysis from TNW itself:

That Ballmer was irked that Sinofsky didn’t, apparently, ‘make it work on tablets,’ shows why in my view Sinofsky was the key player for Microsoft’s future, even as the company is now in his past. Sinofksy was willing to irk his boss again and again. […]

Yep. TNW’s view is that touch on Windows 7 would have at best been a cobbled affair, and at worst an operating system-crippling disaster. Windows 7 worked, and Sinofsky built Windows 8. Right, so, who’s next?

TNW Microsoft would very much like to thank you for your never-ending support this year. As we ready ourselves to be swept into the vortex of the holiday push, we wanted to take a second to display our gratitude. That moment is now officially over.

Now, take all that leftover bourbon that you have from yesterday and make a Lazy Boy. Top Image Credit: BUILDWindows

Read next: Amid a nationwide strike, Wal-Mart is the most talked about over Target on Facebook this Black Friday