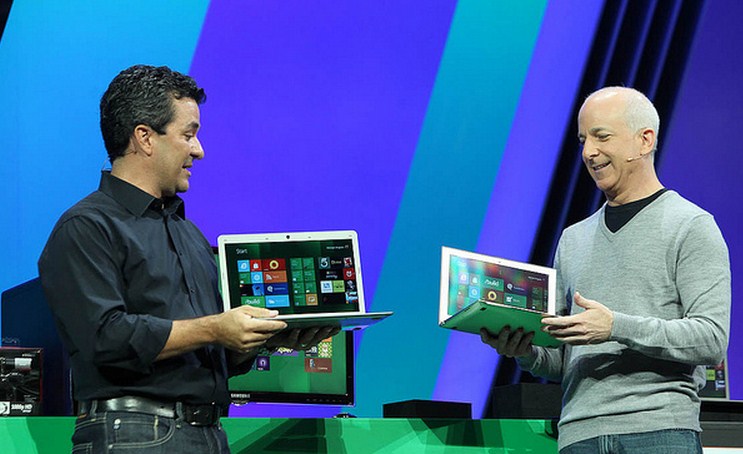 Microsoft’s quarter wasn’t spectacular. The company missed expectations, and has declined roughly 3% in after hours trading. Time to run for shelter? Not exactly.

The leading narrative from the company’s earnings is that the Windows division took a beating. This is true, in a sense. Here’s Microsoft’s own description of the results:

The Windows & Windows Live Division posted revenue of $3.24 billion, a 33% decrease from the prior year period. Adjusting for the impact of the Windows Upgrade Offer and pre-sales of Windows 8 to OEMs prior to general availability, Windows division non-GAAP revenue declined 9% for the first quarter. Windows 8 will become generally available October 26, 2012.

Let’s dig through that paragraph. Windows division revenue declined by a third, a fat margin. However, the next sentence is key. Microsoft has had to defer certain revenues regarding Windows 8 sales to the next quarter; the revenue can’t be counted as part of this quarter as Windows 8 isn’t out yet, roughly. However, if you were to count it, then the non-GAAP decline would be 9%. Great? No, but far better than a more than 30% fall.

We knew that that would happen; as a new operating system looms, sales of new PCs and copies of the previous edition are apt to slow – after all why buy when what is next is just around the corner? That combined with a rough economy, and the decline isn’t a shock. However, if when the Windows 8 revenue is instated as part of the quarter – and we go full non-GAAP – what does the 9% decline mean? Let’s find out.

The simple gut reaction is that if Windows 8 didn’t fill the hole left by declining Windows 7 revenue, then it’s a miss. Is it? From Microsoft’s division breakdown report: “Windows 8 pre-sales revenue 40% higher than Windows 7 in comparative launch quarter.”

Surprised? Don’t be. After all, as TNW has reported, the software is selling well in channels around the Internet, hitting top slot on Amazon’s software charts for example, a poll position that it has held.

What did cause the decline, then? Microsoft has a bullet point that is worth repeating, in regards to the Windows division’s quarterly performance: “Inventory drawdown in anticipation of Windows 8.” Thus, even though Windows 8 is booking solid revenue, the slowdown in the PC market before it ships has held aggregate Windows revenue back.

If that doesn’t make a lick of sense, don’t worry. Think of it in this way: Windows 8 is performing well, but more  number of people who want to buy the operating system pre-installed on a machine than want to buy it alone; thus as Windows 7 revenue slows and PC sales decline in wait of its launch, Windows 8’s future sales are holding back current revenues, even more than can be ‘filled’ by folks pre-buying to code as a standalone.

Given that Windows 8 is designed with tablets in mind, there is some sense to this. More consumers looking to buy a new machine will want to pick up on a tablet that has the software installed; if you buy it in a box, you can probably only install the operating system on a desktop machine. Even Microsoft expects tablets to outsell desktops in the coming years.

Taken all together, Windows 8 appears to be doing just fine. Market and product cycles that are longer than a single fiscal quarter at work here.

The real test will be how well Windows 9 sells once it becomes generally available in 8 days, on October 26th. For now, Windows revenue is a bit of a pile of yesterday’s news. What is coming next for Microsoft matters, and what the last 90 days is simply just the preamble to a new chapter in the company’s life; it will be quickly forgotten.