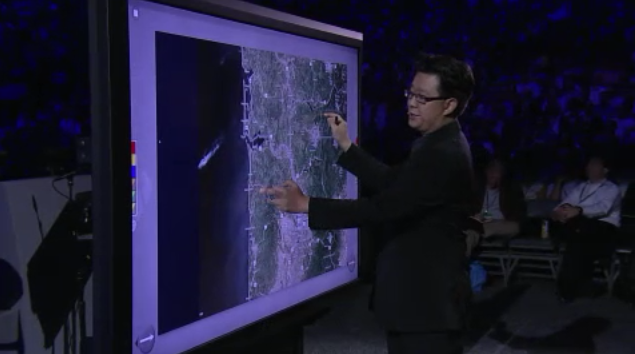 According to Ballmer, Microsoft will utilise its research, development and production of multi-touch technologies to further upcoming software and hardware, with the company showing off its huge 82-inch touch-enabled screen at the WPC event.

You may have heard reports of Ballmer using an 82-inch tablet, well the device he was using was a Windows 8-powered LCD Multi-Touch Display from Perceptive Pixel.

“The acquisition of PPI allows us to draw on our complementary strengths, and we’re excited to accelerate this market evolution,” said Kurt DelBene, president, Office Division for Microsoft. “PPI’s large touch displays, when combined with hardware from our OEMs, will become powerful Windows 8-based PCs and open new possibilities for productivity and collaboration.”

The company’s founder Jefferson Han joins Microsoft, helping to further the multi-touch technologies in Windows 8 but will likely oversee innovations in the Windows Phone business.

Han was also instrumental in helping CNN deliver its election coverage in 2008, leading up to the appointment of President Barack Obama. CNN utilised what it called a “Magic Wall,” allowing presenters to operate a giant election map that could zoom in and out of US states to show votes, swing states and how much of the US Obama and Senator John McCain commanded in terms of votes.

By joining Microsoft, Perceptive Pixel is likely to integrate its technologies and solutions into the Windows 8 and Microsoft Office divisions, moving to “tightly interoperate with its products, and deliver this technology to a very broad set of customers.”