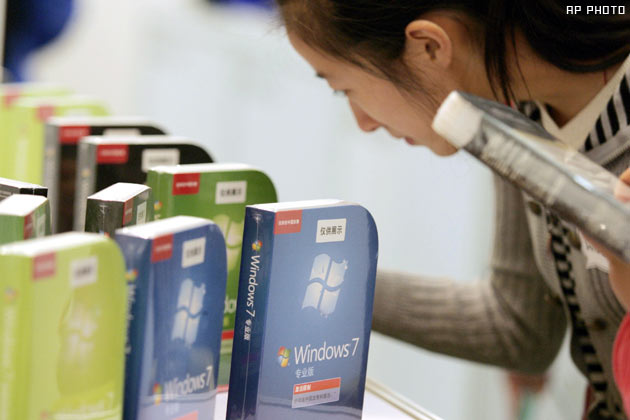 Microsoft appears to be stepping up the fight to curb piracy of its software products, announcing that it has sued Gome Electrical Appliances Holding, a large Chinese electronics distributor, for allegedly infringing copyrights of its Windows and Microsoft Office software.

Reuters reports that Microsoft has filed lawsuits in the Shanghai Huangpu District People’s Court and the Beijing Second Intermediate People’s Court against the distibutor but also Beijing’s Chaoyang Buynow mall, where the pirated copies of Windows and Office were sold.

The Redmond-based giant wants both parties to cease infringing its copyrights and seeks compensation for any losses incurred.

Yu Weidong, general manager for IPR of Microsoft China, said in a statement:

“We hope that the lawsuit will serve as a warning call for computer distributors and sellers to respect intellectual property rights.”

The software giant says that the counterfeit CDs were sold to customers that bought Windows-equipped PCs and laptops from the retailer and it is accusing Comet of acting unfairly towards customers.

Whilst it fights a legal battle in the UK, Microsoft’s focus will be on China, where software piracy is rife. Reuters reports that the International Intellectual Property Alliance estimates that US companies lost more than $15 billion in 2009 due to international copyright theft.

It is believed that China accounts for around a quarter of losses, with copyright theft estimated to cost $3.5 billion.

Read next: We go hands-on with the 16-megapixel HTC Titan II LTE [Video]