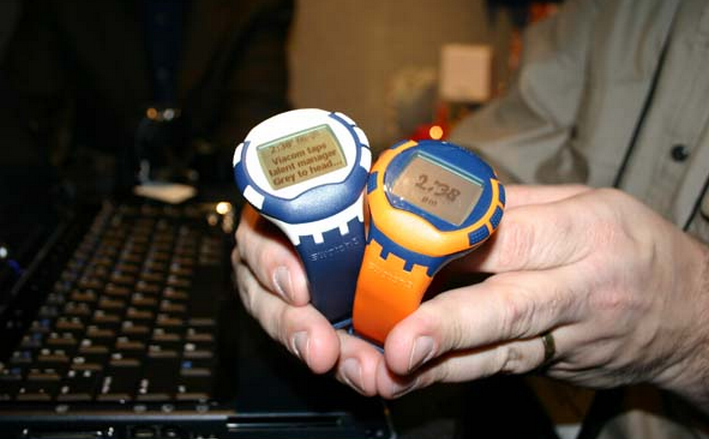 And another era ends. Yesterday, the service that powered Microsoft’s Smart Personal Object Technology (SPOT) devices went offline. For the five or six people who still had a functioning SPOT unit, it must have been a hard moment.

The idea behind SPOT was to use FM transmissions to ship small amounts of data to devices, allowing them to be updated as you used them. Think of a watch that has the latest baseball scores. Before smartphones, the idea had at least some potential. But in the world of iPhones and other high-power handsets, there is simply no need for SPOT.

Microsoft noticed that, and discontinued the products in 2008. The first of 2012 was the stated date of service expiration, and Microsoft pulled the plug on time. According to Geek Wire, the line of SPOT units included a coffee maker, of all things. Via their coverage, we bring you this excellent image:

If that isn’t awkward, I don’t know what is. Also, what’s with the colors on those things? Were they designed to be ketchup and mustard commercials? Even if SPOT had been a hit, those watches would have been heinous. Given that the technology flopped, it’s all the more humorous.

Close the chapter, SPOT is dead. Long live smartphones, which do what Microsoft tried to do earlier in the 2000s. This sort of thing is the natural casualty of the ‘spaghetti against the wall’ method of building products.

Read next: Prepare for the complete destruction of the universe with these Mayan countdowns