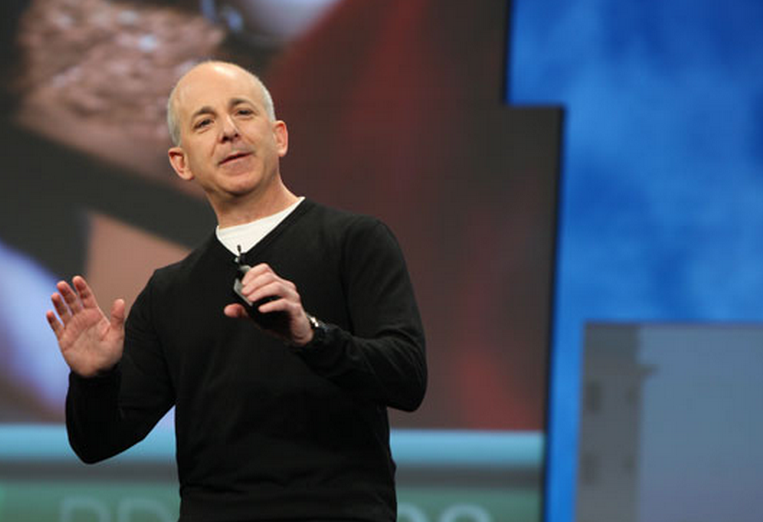 Tonight Microsoft showed to the world the tablet user interface (UI) for its upcoming operating system, Windows 8. Steven Sinofsky, on the stage of the D9 event, finally took down the curtain of secrecy around Windows 8, and showed the goods to the world.

In the name of background, some 6,000 people work for Sinofsky he revealed during his talk, a number that sounds about right, given the scope of the parts of Microsoft that he runs. At the start of his interview, Sinofsky also downplayed Ballmer’s comments on Microsoft market stature.

When asked why it took Microsoft some 18 months to completely respond to the iPad, Sinofsky said that the game is “long,” seeming to indicate that he does not view Microsoft as out of the running in any way for market leadership.

This is the first image that came forth of the tablet UI for Windows 8:

Sinofsky also confirmed Windows 8 as the the code name for the operating system, opening the door to its name changing in the future. Another shot of the UI:

The most obviously interesting thing in the above image is the massive ‘Store’ link, pointing to Microsoft releasing a new Windows app store, something that has been widely rumored.

According to Sinofsky, he views Windows 8 as “a reimagining of Windows, an example of coloring outside the lines.”

For anyone looking to get ahead of the market, AllThingsD has published a run through of what Microsoft is set to announce over the next 20 minutes or so here. Microsoft gave them a jump on the material as it is their event.

Sinofsky also spent time during his talk to discuss system requirements, saying that as phones have become very powerful in recent time, they now have enough power to run Windows. He also alluded to the idea that Microsoft had that they could build a new version of Windows without extensive new performance requirements.

Backwards compatibility seems to be a go for anything running on Intel chips, but in the case of ARM processors we are not so sure.

At that point, it was demo time. What follows is an image of the demo setup at the event (images via ThisIsMyNext):

The device in action (all following images are a skin that runs on top of Windows – you can jump back to Windows which is “always running:”

Windows 8 starts with a normal looking lock screen. The start screen from their is an obvious echo of what Microsoft put together for Windows Phone 7. This thing is literally dripping in Metro love, which is sure to keep Microsoft cans happy.

App support has changed. According to AllThingsD:

Windows 8 essentially supports two kinds of applications. One is the classic Windows application, which runs in a desktop very similar to the Windows 7 desktop.

The other type of application, which has to be written in HTML5 and Javascript, looks more like a mobile application, filling the full screen. Internet Explorer 10, which is part of Windows 8, has already been configured to run in this mode, as have several widget-like apps for checking stock prices and weather.

Microsoft then demoed the ability to jump back into Windows from the tablet UI. We like this: it allows users to enjoy a slate all the time, and then go mouse/keyboard whenever they want if needed. This will allow users to have a device that fits both leisure and business requirements without sacrifice.

This is what the UI looks like on a Lenovo laptop:

According to Microsoft on stage: hundreds of millions of computers in the wild can run Windows 8. Not that they are tabulating their future revenues, of course.

And of course, how could we leave you without an obligatory shot of Kara Swisher getting her Windows 8 on?

Sinofsky confirmed next what we already knew: Windows 8 is not coming out this year, but probably in 2012. Some pundits are calling this new layer on top of Windows to be “jarring,” while others are calling it somewhat tame. What do you think? Sound off in the comments. The Microsofties seem to think that as they have made everything compatible, it is not that large of a shift.

A new episode of Sliverlight Slighting might be in tow. According to show notes, only Javascript and HTML5 were mentioned as tools to build apps for the new layer, and not Silverlight.

According to Microsoft, applications that are designed for touch will automatically be transcribed by Microsoft to handle a mouse and keyboard set up.

A discussion then followed on the finer points of control, and when a mouse is more useful than a finger. Photoshop, the given example, would indeed be a nightmare using only fat fingers.

Microsoft then promised to have hardware details and information regarding boot times in September, perhaps the full coming out date for the OS.

In the question and answer part of the presentation, Sinofsky said that there was indeed still a place for Silverlight on the new platform, and that: “The browser that we showed runs Silverlight and it will still run on the desktop.” Yeah, that’s not going to cut it with Silverlight fans.

Finally, don’t call the touch elements of Windows 8 a layer. To Microsoft, they are not. Instead, they are a new element of the core OS, not something tacked on. That is all for now folks! Be sure and check out all of our Windows 8 coverage.

Read next: Windows 8 apps to be built in HTML & JavaScript