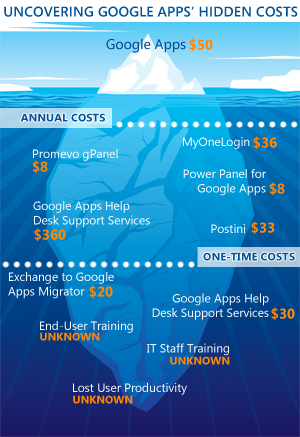 Everyone knows that Microsoft is never going to cede one inch of its market position in the enterprise sector to Google without going to war first, and the company again made that plain today in a fiery blog post that called out Google Apps for small and medium-sized businesses as far more expensive than advertised.

Microsoft, using its cash as a weapon, interviewed 90 companies (small to medium in size) in five countries that use Google Apps and found that 90% use Microsoft Office alongside of Apps.

But Microsoft was not content to just point out that many companies require the (it must be said) more extensive productivity feature set that Office offers over Apps, but went after Google Apps for being too costly:

Microsoft whipped up this rather childish ‘infographic’ to illustrate its point:

Of course, this is a one-sided view on the matter, but Microsoft’s point that a company coming from a legacy position as a Microsoft customer looking to move to Apps can’t just look at the yearly cost per user as advertised, is fair. Then again, if any company actually thought that that was the case, that they are still in business while suffering from such ignorance is a miracle.

For truly nimble small businesses who doesn’t need Postini, or Google support, or to migrate from anything to Google Apps, the cost could truly land down around the $50 mark, which is quite the deal.

We watch the productivity space very carefully here at TNWmicrosoft because Office is such a driving force in Microsoft’s earnings. Sound off in the comments if you think that Google is going to respond.

Read next: Need WiFi when traveling abroad? Rental MiFis are getting cheaper.