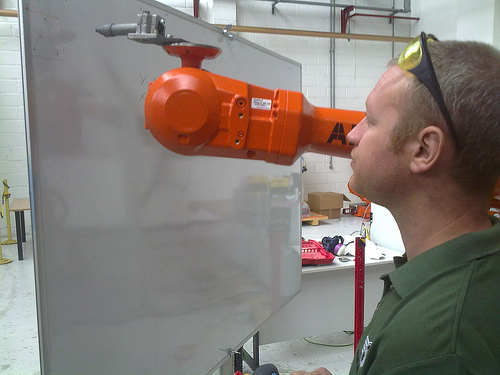 Diluted EPS was $0.61 per share for the quarter, up a sharp 36% year over year. Analysts had been expecting earnings of some 56 cents per share.

Microsoft cited a “mixed” PC market for the quarter, but called their results “strong.” The Microsoft Business Division, responsible for Office among other products grew 21% year over year, which helped Microsoft post the numbers that it did. The company also cited its Kinect and Xbox lines as strong, saying that the pieces of consumer hardware were being purchased at “tremendous rates.” The Kinect is the bestselling consumer gadget of all time.

Microsoft’s stock was up $0.33 on the trading day which ended before the earnings were released, or 1.25%. In current publicly available after-hours trading information, Microsoft’s stock is down over 2%. According to some analysis, investors were expecting more of a “blowout,” causing the sell off of Microsoft’s stock.

While certain parts of Microsoft’s empire are strong, its Online Services Division lost more money, $726 million, than it brought in in revenue, $648 million.

What follows is the Microsoft earnings release:

Redmond, Wash. – Apr. 28, 2011 – Microsoft Corp. today announced third-quarter revenue of $16.43 billion for the quarter ended Mar. 31, 2011, a 13% increase from the same period of the prior year. Operating income, net income, and diluted earnings per share for the quarter were $5.71 billion, $5.23 billion, and $0.61 per share, which represented increases of 10%, 31%, and 36%, respectively, when compared with the prior year period. Diluted earnings per share included a $0.05 tax benefit primarily related to an agreement with the U.S. Internal Revenue Service to settle a portion of their audit of tax years 2004 to 2006.

“We delivered strong financial results despite a mixed PC environment, which demonstrates the strength and breadth of our businesses,” said Peter Klein, chief financial officer at Microsoft. “Consumers are purchasing Office 2010, Xbox and Kinect at tremendous rates, and businesses of all sizes are purchasing Microsoft platforms and applications.”

Microsoft Business Division revenue grew 21% year-over-year. Since its release last spring, Office 2010 has become the fastest-selling version of Office in history, and the integrated innovation with SharePoint, Exchange, Lync and Dynamics CRM is driving significant growth for the division.

Windows 7 remains the fastest selling operating system in history with 350 million licenses sold. Revenue for the segment was down 4% in the third quarter, in line with the PC trends, excluding prior year launch impact.

“We delivered strong third quarter revenue from our business customers, driven by outstanding performance from Windows Server, SQL database, SharePoint, Exchange, Lync and increasingly our cloud services,” said Kevin Turner, chief operating officer at Microsoft. “Office had another huge quarter, again exceeding everyone’s expectations, and the addition of Office 365 will make our cloud productivity solutions even more compelling. We continue to see strong adoption of our cloud-based services among the Fortune 500.”