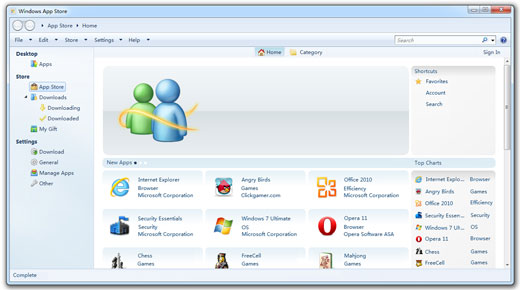 Screenshots from the Windows 8 beta posted on cnBeta seem to have revealed why Microsoft went to the extent of hiring a linguist to protest Apple’s trademark application for the phrase ‘App Store’.

These screenshots show an app with the name Windows App Store, and it bears a similar format to those stores already out in the wild — like Apple’s Mac and iOS app stores minus the polish. Here’s one shot, complete with an obligatory Angry Birds inclusion:

It’ll be interesting to see whether the Windows App Store takes off when Windows 8 hits shelves. The iOS App Store certainly did, but it’s also the only way to legitimately get apps onto your iPhone or iPad. I don’t personally use the Mac App Store — I’m quite accustomed to getting my software from the developers themselves — but I can understand the appeal of convenience for those that do.

Prepare for the legal battles between Apple, Amazon and Microsoft over the legitimacy of the phrase ‘App Store’ as a trademark to really erupt in the short term.